All hail the godlike Pig Pole! 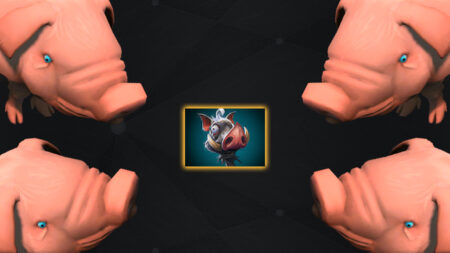 The item provides its holder a plus six to all stats, and has an active ability where the user is hexed and gains an additional 10% base movement speed for four seconds.

There was a lot of positivity from the community when they read about Pig Pole in the patch notes. Some praised IceFrog for his creativity, while others just liked the idea of running around cosplaying as a pig.

To be fair, who wouldn’t?

Looks can definitely be deceiving, so trust us when we say that its a pretty darn good neutral item.

Here are 3 reasons why you shouldn’t ignore Pig Pole

Considering that Pig Pole is a tier one neutral item that can drop as soon as seven minutes, gaining access to an extra six points of raw stats across the board when held is huge. It’s equivalent to having bought a Belt of Stength, Band of Elvenskin, and Robe of the Magi.

Any hero equipped with a Pig Pole gain:

No other early game item provides this much value to its holder.

On top of its impressive stats, Pig Pole’s active ability ‘Pig, Out!’ is useful for a variety of reasons. It can be used to outrun incoming ganks, help close the distance in a chase, and can even synergize with certain spells.

The active ability is particularly good in the early game where most heroes don’t have full access to their mobility spells and items yet.

Movement speed can make or break an early game gank

Heroes such as Batrider, Death Prophet, and even Dark Seer particularly enjoy using Pig Pole. Spells like Firefly, Exorcism, and Ion Shell require the user to get right on top of the target and persist when ‘Pig, Out!’ is activated.

3. It’s free and doesn’t take up an item slot

As a neutral item, it costs you and your team absolutely nothing to make; a boon especially for supports who often have limited gold and inventories after hauling around wards and utility items.

Since it will probably be in high demand if it drops, you’ll have to either pray your teammate lets you have the Pig Pole or be the fastest clicker around.

Keep your eyes peeled as soon as the clock strikes seven and tier ones start dropping!

READ MORE: Neutral items are now more balanced than ever in Dota 2 patch 7.30