A perfect tribute to the casting icon. 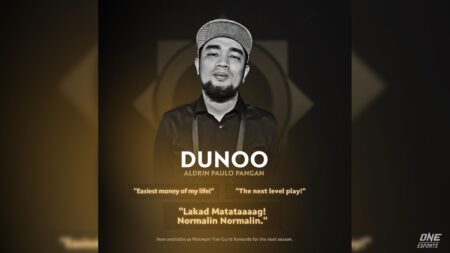 Valve announced their recent Dota Plus Fall update and included a touching dedication to Aldrin Paulo “Dunoo” Pangan who passed away on August 26 2021 due to COVID-19.

He was a legendary Filipino caster in the Dota 2 community, who alongside Marlon “Lon” Marcelo, voiced the most iconic line in the chat wheel, “Lakad Matatag, Normalin, Normalin.”

Many of their voice lines from this match between Team Secret and Fnatic were added in the The International Battlepass since then.

The seasoned shoutcaster previously worked with Valve as their official talent for the Filipino language stream at The International 2016. Valve released a statement about honoring his memory alongside their recent Dota 2 update.

“We were saddened to hear recently of the passing of Aldrin Paulo ‘Dunoo’ Pangan, an icon of the Filipino casting community. As a tribute, for the next season, the selected chat wheels feature some of his most iconic lines,” wrote the game developers.

Three of Dunoo’s voice lines will be included in the Platinum tier for Guild rewards. Guilds who complete Dota Plus Fall quests will be rewarded with the game’s most iconic voice lines.

READ MORE: Dunoo is fondly remembered by the Dota 2 community