EHOME will be competing at the China Dota 2 Pro Cup Season 2. 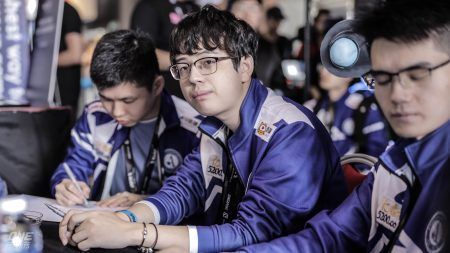 In its official announcement, the EHOME detailed that Fade will take over the support role, which would effectively place Zhou “Yif” Yifu off the team’s active roster. Though Yif’s circumstances are unclear at this time, the post mentioned that EHOME wanted to respect his wishes and personal development needs, which is why Yif’s been listed on a temporary break.

Team Aster, likewise, released its own statement regarding Fade’s transfer to EHOME. The team thanked their former captain for his contributions to the club, and wished him the best in his future career.

Fade’s most successful period throughout his pro career was when he played for Vici Gaming, which showcased impressive DPC season campaigns. Fade was on the Vici Gaming roster from 2016 to 2019, right up until the team was outclassed by Team Secret in a lower bracket match during TI9. Right after being eliminated from TI9, Fade then announced his retirement from Dota 2 when allegations of the support player switching teams unbeknownst to Vici Gaming came to light.

A month later, however, Fade came out of retirement and signed with Team Aster as its new team captain. Fade would continue to play for Team Aster, until this year’s Chinese Dota 2 roster shuffle period ended. He then signed with Team Sirius in October of this year, and moved to EHOME right after that.

EHOME has continued to perform well in online competitions this year, including a first-place finish at the DPL-CDA Professional League Season 2 where they defeated Invictus Gaming 3-1. The team followed that up with a second-place finish at the China Dota 2 Pro Cup Season 1, where they were ultimately swept by a revamped PSG.LGD roster led by Wang “Ame” Chunyu.

Fade’s move to EHOME also means he is now reunited with his former teammate on Team Aster, Song “Sccc” Chun. The two were part of Team Asters’ Dota 2 roster during the 2019-2020 DPC season up until it went on hiatus.

Fans can look forward to seeing how Fade fares on his new team, as EHOME will be competing in the China Dota 2 Pro Cup Season 2 next, where they are expected to go up against teams like Vici Gaming, 4AM, and PGD.LGD in future matches.