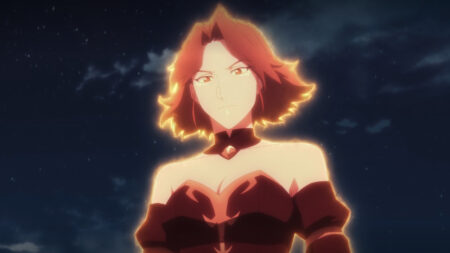 Netflix’s DOTA: Dragon’s Blood season 2 is out, and there’s plenty of pretty to look at.

While fans might be swept away by the overarching lore and plot, there are several Dragon’s Blood Easter eggs that might fly over your heads while you’re immersed.

Anime Invoker is distinctly different from the one we know in game. Dragon’s Blood Invoker is a master of transportation magic, pulling himself and others through space with the ease of moving a chess piece. But in episode three, The Lady of Situations, he finally showed that his Quas, Wex, and Exort orbs are not just for show.

Invoker used all three of his orbs to summon a devastating Sun Strike against Vahdrak, the Chaos Dragon. It’s not entirely game accurate, considering that combination in Dota 2 will get you Deafening Blast, but maybe it’s just visually prettier for the show.

Auroth, the Winter Wyvern, appeared as a savior to the remnants of the knights of Dragon’s Hold in episode two, after a brutal offensive from Terrorblade and a swarm of wyrmlings.

She becomes a staunch ally for the party from then on, including providing Bram with a protective ring that looks suspiciously like Cold Embrace. Its rounded cocoon seems to draw inspiration from Winter Wyvern’s immortal, Icelight Edifice.

The Pangolier we see in the show is not Donté Panlin, but a new character called Nico Hieronimo. He’s just as suave, however, and just as flirty as the Pangolier we are familiar with.

And like Donté Panlin, Hieronimo isn’t averse to using his natural skills to his advantage. We get to see the Pangolier use Rolling Thunder to knock out several guards, and even used it to rescue Luna from a dire situation, much like Tusk’s Snowball. Perhaps this might be a suitable buff or upgrade for Pangolier in the future.

4. Neutral creeps need to live too

While Dragon’s Blood has been filled with background races we’re familiar with as heroes, book two snuck in a pair of neutral creeps—with what looks to be a Satyr Tormentor and a Hill Troll.

The Ancients are comprised of Radiant Ore and Direstone, known to influence minds and draw heroes and champions to their tasking. Maybe neutral creeps aren’t really creeps, but natural denizens of the area trying to survive a war between two sides driven mad by the Nemesis Stones. In better times, they are just like us.

But they do give a lot of gold. Delicious, delicious gold.

Zet, the Arc Warden, is the supposed watcher of the Radiant and Dire. But lengthy battles have drained his power, and even he couldn’t stop the Radiant Ore and Direstone from finding their way to the Dota stone.

In the penultimate episode of the season, lots of reveals were dropped. Kashurra is more than what he seems, thanks to the influence of the Nemesis Stones, held by a statue of the Arc Warden.

Winter Wyvern underwent a similar transformation due to the Radiant ore, so it’s safe to say that dragons can be granted human form through the power of the magical stones.

2. There’s a Dota multiverse out there

Though Invoker’s appearances are few, his Easter eggs are many. In episode four, Desolate and Empty the Sea, a conversation between the Invoker and Terrorblade reveals more truths about the world they live in.

“In countless realities, you are the same,” Terrorblade accused the Invoker. In the Demon Marauder’s shattered Foulfell, a more familiar Invoker reflects back at us in his iconic white costume from Dota 2.

Various versions of Invoker in the multiverse have different accessories and slightly different hairstyles. That means Netflix Dota is a world of its own, and Invoker inhabits but one of its many configurations.

This also explains why Terrorblade looks so much like his game counterpart compared to everybody else. The Terrorblade we see in the show and game are one and the same, capable of piercing through “countless realities”–and he sees you. Pray he doesn’t ask you to let him in.

In the first episode of the series, Nothing with Nothing, a Father of the Dragon Knights posits that extraordinary people in this world often exhibit traits of dragons—including Crystal Maiden and Lina. These people are part of the so-called Dragon Clan.

And after seeing Lina’s awesome power in action as she alternates between Dragon Slave (it was right there all along!), Laguna Blade, and her incredible hotness, it’s not hard to believe.

Is it any wonder people get thirsty around her? Look at the size and destructive power of her flames.

Perhaps that could explain why so many heroes in Dota 2 are able to compete against gods and forces of nature. Maybe Sniper has the traits of a bullet dragon? Or did Techies strike a deal with an explosion dragon? It seems what a hero truly needs, is some dragon’s blood.