How to counter Viper in Dota 2 with kYxY

He’s big and green, but he’s not an unbeatable Hulk. 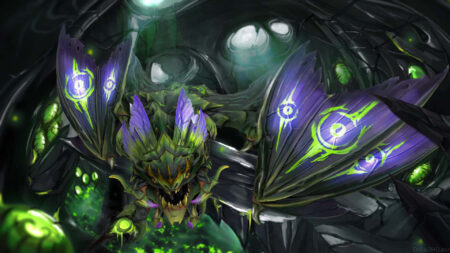 Viper has been gaining in popularity in Dota 2 throughout patch 7.29. During the Animajor in June, the hero was the 30th most picked, but during the Regional Qualifiers for The International in July, he was the fifth most contested hero in the game.

His popularity hasn’t waned since. In the current Loot.Bet Pro Series 7, he is the most picked Dota 2 hero so far, almost doubling Lion‘s pick rate.

The hero’s laning flexibility, ability to harass enemies of out the lane, and powerful Break make him a nuisance to play against., but that doesn’t mean players don’t have options against him.

We asked third place TI3 finisher Lee “kYxY” Kong Yang for his advice on how how to play against Viper, which Dota 2 heroes to pick, items to buy, and strategies to employ.

Here are some tips to help players always come out on top.

kYxY explains that one of Viper’s strengths is his ability to harass the lane. He relies on stacking poisons to ensure enemies don’t get close to him. To counter that, it’s a good idea to take cores who can fight well in the early game, such as Riki.

Riki isn’t the typical counter to Viper most of us think of. kYxY mentioned that Riki’s good laning stage, high mobility, and combination with dominant laning supports like Grimstroke or Witch Doctor would crush the early game.

Riki is able to evade a lot of Viper’s auto attacks thanks to Tricks of the Trade. Tricks of the Trade also enables Riki to dodge Viper Strike later on. Riki can easily close the gap with Blink Strike, and should things go sour, escape as well.

Viper is slow and relies on immobilizing his enemies to get kills and win fights. Riki can abuse Viper’s weak mobility with Smoke Screen, for it disables Viper’s spells and causes him to miss most of his auto-attacks. With a Diffusal Blade, Riki is able to disable enemies in his Smoke Screen for much longer.

While most Dota 2 melee heroes would struggle against Viper, Riki and his bag of tricks are a perfect counter to him.

Dark Seer doesn’t counter Viper in the laning stage. Instead, Dark Seer has the potential to completely nullify the Netherdrake’s abilities once both teams start grouping up.

Dark Seer’s Ion Shell allows players to get up close and personal with Viper, something the hero doesn’t appreciate. With Aghanim Scepter, Ion Shell also provides 300 health to other heroes, allowing them to stay alive and shrug off Poison Attack.

Surge is the main reason that Dark Seer is such an effective counter. Viper has no stuns, and relies entirely on slowing his enemies to do damage. Dark Seer’s Surge allows allies to move at max movement speed without being slowed, and is a perfect counter to slow-heavy lineups.

It takes a while for Dark Seer to scale up, but once team fights start happening, Dark Seer is the perfect counter to have.

Viper relies on stacking Poison Attack to be effective. Whether in lane for harass, or in team fights, Poison Attack is a crucial part of the hero’s kit.

That’s why Dota 2 heroes with dispels are strong counters. Dispels will remove all stacks of Poison Attack. Viper’s auto-attacks are decent but not amazing, and without Poison Attack, the hero’s right-click abilities are a lot less threatening.

kYxY explained that this is the reason why teams should try to draft heroes with dispels. The two Dota 2 heroes kYxY recommends are Oracle and Abaddon. Both of these are hard supports with good saves, particularly Abaddon.

Melee Dota 2 heroes are usually victims of Viper, for his multiple ranged slows makes it difficult for melee heroes to be around him in extended trades, particularly in the laning stage.

Even with all the disadvantages of being melee, Abaddon still maintains 55% winrate against Viper, thanks to Aphotic Shield.

Abaddon’s healing ability, Mist Coil, is fantastic to have against Viper, who relies on damage over time. The Netherdrake’s low DPS means that enemies have an ample amount of time to regen in fights, something Abaddon can take advantage of thanks to how strong the heal meta is.

Lastly, it’s difficult to kill Abaddon most of the time thanks to Burrowed Time. Abaddon’s ultimate will automatically trigger when he is low in HP, and remove all negative effects. Not only is Abaddon a strong counter, but he is also one that’s likely to last a long time in each fight.

kYxY’s tip for playing Abaddon is that you should always remember that Nethertoxin disables Burrowed Time’s passive proc. Be sure to manually use it in fights when low in HP.

Tips and tricks: Manta Style, Force Staff, and Lotus Orb are your friend

Viper gets weaker as the game goes, but can still be a nuisance in the late game. This is why there are multiple items players can aim for to deal with him.

Manta Style is a great carry item against Viper because it is able to remove his Poison Attack stacks. This allows players to either escape or give chase when the situation favors them. With careful timing, players can also use Manta Style to dodge Viper Strike.

For offlaners and soft supports, kYxY recommends getting a Lotus Orb. Not only does Lotus Orb remove all Poison stacks, but it can also reflect Viper Strike. His ultimate is a fairly slow-moving projectile, and one of the easier spells to reflect in the game.

For hard supports, there’s always the trusty Force Staff. While not the greatest counter, Force Staff’s ability to put space between Viper and his victims will make a difference in a lot of matches.

There are times when Viper will win the lane. The hero then snowballs with farm and levels. At that point, kYxY recommends that the best thing to do is just leave him alone.

The hero’s main strength is his early snowball potential. Viper wants opposing Dota 2 heroes to come to his lane and try to kill him, and so leaving him alone is the best option, for he can’t take towers or push lanes fast. Plus, this hero is slow, and scales badly into the late game.

As such, Viper will then have to try to chase enemies around the map, or try to push towers, which he is simply not good at doing, kYxY elaborated.

Leaving him alone also means other lanes will have much higher killing potential. All in all, it’s the best course of action.