Ana to play for Royal Never Give Up at Arlington Major 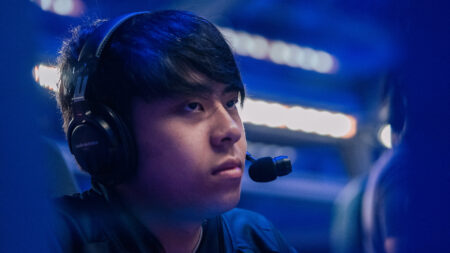 Dota 2’s most famous recluse is back at a Valve LAN again.

Anathan “ana” Pham will be playing at the PGL Arlington Major, in place of Royal Never Give Up’s Malaysian carry, Daniel “Ghost” Chan Kok Hong. Ghost, who played for RNG at the Riyadh Masters 2022, was unable to get his visa approved in time for the US$500,000 tournament.

Instead, ana will be the team’s substitute, the Chinese team announced via Weibo. The 22-year-old briefly made a return to competition last year for OG, and stood in for Team Liquid’s Lasse “MATUMBAMAN” Urpalainen at the Riyadh Masters.

RNG isn’t the only team having issues with visas. So far, six teams have needed to find substitutes for their regular players, while compatriots Xtreme Gaming have outright decided to forfeit their slot at Arlington.

RNG sits at 15th place in the Dota Pro Circuit 2021/2022 rankings with 738.42 points. Outside of the 12 direct invites to TI11, the Chinese team will guarantee a berth in Singapore with a top three finish. Any less, other results will need to fall their way—but there’s still a good shot.

China, a historically dominant region, will feature just three teams at the Major. With PSG.LGD guaranteed a ticket to TI, it’s up to RNG and Team Aster to secure their places—lest they go through the grueling Regional Qualifiers with several capable teams waiting in the wings.