Shining bright for everyone. 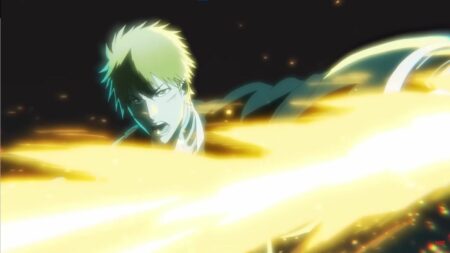 The new Bleach Thousand Year Blood War anime, scheduled to start in October, received a new trailer at Anime Expo in Los Angeles over the past weekend.

Compared to the first trailer, which was released in December last year, we got a much closer look at the starring—but still huge—cast, including a glimpse at several of the antagonist Quincies. There’s also a much more somber tone, thanks to the foreboding soundtrack, a taste of what is sure to be brilliant scores from composer Shiro Sagisu who worked on Bleach, Neon Genesis Evangelion, and Magi: The Labyrinth of Magic to name a few.

Ichigo is getting a visual upgrade in Thousand Year Blood War

Bleach’s main protagonist, Ichigo Kurosaki, is looking even spiffier than usual in the new trailer, decked out with his new golden energy.

In the prior anime adaptation, Ichigo’s spiritual power was colored blue, which is technically inaccurate following the release of Bleach’s colored manga, where it was golden in his shikai form.

Other powers on show included Byakuya Kuchiki’s Senbonzakura, with individual petals taking on a distinct glow compared to the earlier seasons of the anime, and Genryūsai Shigekuni Yamamoto’s fearsome fire.

The trailer’s overall quality looks amazing. The animation is crisp, and Pierrot seems to be upping their game for the series.

While Bleach’s Fullbringer arc might be one of its least popular, it was also one of its prettiest when first released in 2011. The scenes on show in the trailer are reminiscent of the upgraded image quality that the Lost Agent arc had.

Shots in the trailer also seemed to indicate the more dire tone that TYBW will have throughout the series, with visuals that trend towards darker colors.