Diana and Pantheon are finally viable after patch 2.2a buffs

Time to start playing this AD and AP fighter. 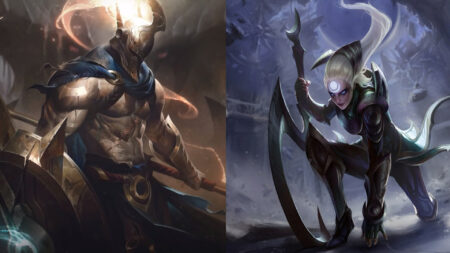 Living in the shadow of her sister Leona, who entered League of Legends: Wild Rift much later, Diana hasn’t been seen much in ranked games. S+ tier champions like Katarina, Galio, and Orianna, have been much better picks compared to this AP fighter.

Likewise, despite the hype around Pantheon, he was underwhelming upon release.

Recognizing that both of these fighters were weak, Riot buffed both of them across the board in Wild Rift patch 2.2a.

First off, Diana now has an extra 40 flat HP, which will really help her early game skirmishes.

On the League of Legends PC version, her attack speed bonus was all along tied to her passive. With this patch, Wild Rift Diana is more aligned with her PC counterpart and will deal more damage as she’s better able to weave in auto attacks in between spells.

Besides reduced cooldowns on her first and second ability, most noteworthy is that her ultimate’s base and scaling damage have both been buffed, increasing her overall burst output and potential to snowball.

Based on Excoundrel’s patch 2.2 tier list, he placed Diana in A tier. With these major buffs, she’s definitely getting bumped to at least S-tier, alongside Ahri and Akali.

Pantheon’s first ability, Comet Spear, has also been buffed significantly. Its base damage has been increased by 15 at level one before tapering off at later levels. Since he uses this in lane to poke and as a finisher move, this means he’ll definitely pack a bigger punch in the early game, so watch out!