100 Thieves new roster is off to a great start. 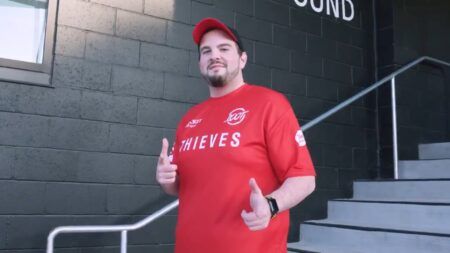 During 100 Thieves’ semifinal match against Sentinels, the clutch master himself, Spencer “Hiko” Martin, willed his team to victory on Bind with a 20/9/7 MVP performance using Sova.

Hiko also showed why he is still considered one of the best competitive FPS players in the world with an insane 4-kill clutch round win, while 100 Thieves was on an eco round against Sentinels.

After losing control of the A-site, Hiko used his Hunter’s Fury ultimate that eliminated Hunter “SicK” Mims and Jared “zombs” Gitlin from the round. And after Quan “dicey” Tran was taken out, Hiko landed a Shock Dart on the spike planter that turned it into a one-on-one situation. With only a Ghost in hand, Hiko charged the last remaining Sentinels player and clutched the round for 100 Thieves.

Later, during their quarterfinal match against TSM, both Hiko and Asuna came up big in an all-important 24th round that forced overtime against TSM. 100 Thieves then secured the series with a 15-13 overtime win on Haven.

100 Thieves would eventually lose to Team Envy in the grand final but both Team Envy and 100 Thieves, along with third/fourth place teams, Renegades and Sentinels, will advance to the North American First Strike tournament on December 3.