Valorant KAY/O guide: He’s the ultimate counter to any agent in Valorant

KAY/O will change the Valorant meta. 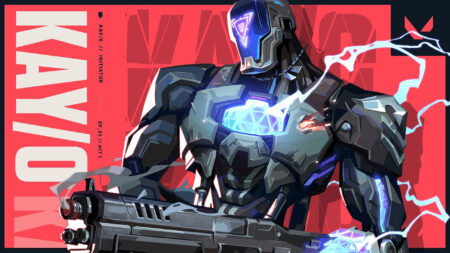 Riot Games has decided to shake up Valorant with the introduction of a brand-new game mechanic from its newest agent, KAY/O.

The much-awaited character can suppress enemies, disabling them from using their agent abilities. If that wasn’t exciting enough for you, KAY/O also has a unique ultimate that allows his teammates to revive him.

Before the Valorant community starts calling the new agent broken, we went on a deep dive to assess his agent abilities, strengths, weaknesses, combos, and counters.

Here’s everything you need to know about Valorant’s newest agent.

Who is KAY/O and what role does he play in Valorant?

This Valorant war machine’s backstory is similar to that of the Sentinels from X-Men. The murder-bot was built for one reason: to neutralize radiants.

His agent select animation is also reminiscent of Arnold Schwarzenegger’s Terminator, but with a Shotgun (Bucky).

The newest agent is listed as an Initiator whose agent abilities are quite different from Breach, Sova, and Skye. KAY/O is not for beginners. Knowing which agents to suppress on attack or defense will be key.

Suppressing an enemy agent requires extensive gameplay experience. You will need to be two steps ahead to properly utilize it.

100 Thieves’ team captain, Spencer “Hiko” Martin even called KAY/O a duelist who could replace Phoenix or Raze’s roles in the competitive scene’s agent composition meta. “I feel like his (KAY/O) abilities are a duelist’s [skills],” said Hiko.

FRAG/MENT is a single-charge explosive fragment that activates once it hits a horizontal surface.

It is different from other mollies because it does pulse-type damage. It has four pulses, which last four seconds. Three pulses of FRAG/MENT are enough to kill an enemy agent.

FLASH/DRIVE is a blinding ability works similarly to other throwable flashes in Valorant. It has two charges and can be thrown two different ways.

Using left-click will throw the flash further with a longer fuse of around two seconds. Its right-click drops it closer to you and has a one-second fuse.

This is KAY/O’s main ability, and he gets one free charge at the start of the round. It is replenished automatically, similar to other agents’ main abilities.

ZERO/POINT functions as a thrown suppression blade that sticks and explodes on impact. KAY/O will know which agents were caught in its sizable blast radius, but their locations won’t be revealed.

Agents hit by ZERO/POINT’s blade will be suppressed and will be unable to use their abilities for eight seconds.

The suppression blade does not affect teammates and does not stop already activated abilities. You cannot suppress an ability by targeting them. You must hit the enemy agent to suppress their abilities, like Trapwires and Turrets.

You can also remove Jett’s Blade Storm or Raze’s Showstopper ultimates with the suppression blade.

KAY/O’s ultimate, NULL/CMD, overloads the agent with polarized radianite energy that pulses four times with a massive radius. Enemies hit with pulses are suppressed for four seconds per pulse.

KAY/O gains a fire rate boost while NULL/CMD is active. He can also be re-stabilized if downed.

Allies have about 15 seconds to revive the new agent from his downed state. When in a downed state, KAY/O has 850 health points and can be eliminated by the enemy team if he loses all those points again.

Yes, this means Jett can finally revive someone. Thank you, Riot Games.

Strengths of having versatile agent abilities

The best use of KAY/O will be to stop site rushes. Enemy agents who are hit by his ZERO/POINT suppression blade won’t be able to use their entry abilities when they attack sites.

The number of agents revealed in its radius will also give you a better understanding of which parts of the map are open.

KAY/O is a viable alternative to a duelist because he has similar abilities to them. Equipped with two flashes and a molly, this robot can help teammates enter sites and clear corners while on the attacker’s side.

Hiko even compared the NULL/CMD ultimate to Phoenix’s Run It Back as an ideal entry ability because KAY/O’s team would have an extra life if they manage to revive him.

Who does KAY/O work well with?

Gaining information will always be pivotal in Valorant, and Sova and Cypher’s agent abilities make them the best in this field.

Giving KAY/O specific enemy agent locations will lead to them getting suppressed. This gives you the advantage if the enemy can’t use their defensive setups or entry abilities.

How do you play against this new agent?

Simply put, you’ll need to rely on your shooting mechanics and team communication to play around KAY/O. The best way to catch the agent by surprise is to go after him right when he’s about to use his agent abilities.

There are three key visual indicators when KAY/O is about to use his agent abilities: The colors on the robot’s body change when he’s about to use an ability. Light blue for the molly, red for the flash, and purple for the suppression knife.

The screen on KAY/O’s head also shows the corresponding agent abilities he has equipped.

It is way too early to tell how strong this new agent will be in the current Valorant meta. Countering enemy agent abilities is a new concept in Valorant that will force players to think and play differently.

From what we can gather, KAY/O is an agent that will be viable and versatile on all maps because the agent can play many different roles.

For players who want to use KAY/O as their new main agent, you’ll first need to master his agent abilities, and put in effort to read opponents well.

Just remember: in Project A, shooting matters. You don’t kill with abilities, especially if there’s a KAY/O on the enemy team.