A video of a washing machine full of bricks provided inspiration. 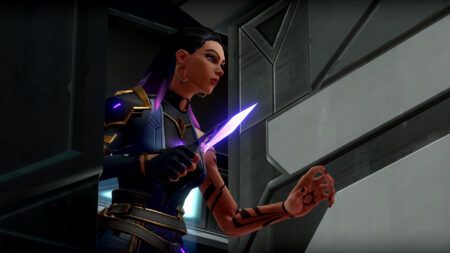 Singularity, Valorant’s latest weapon skin bundle for Act III is the most ambitious design Riot has created to date.

The weapon’s thematic goals were high-tech, mysterious, powerful, and abstract; while its key features included transformation, animation, and visual effects, which we see after getting a kill to finish the round.

The full bundle, on the other hand, will set players back 8,700 VP and includes all the weapons previously mentioned, along with a Singularity Player Card, Spray, and Gun Buddy.

According to Riot’s Art Lead, Sean Marino, the team set out to design a game-changer, a set of weapons that players wouldn’t expect. “The team needed to demonstrate that they were ready to tackle the challenge of creating something with a drastically different silhouette and unique custom animation,” explained Marino.

He described that the Singularity Skin had an otherworldly shape and unique design for expanding and contracting. “It felt like something that couldn’t be from this planet or time in history, which was really appealing to me.”

Riot Producer Preeti Khanolkar then shared an interesting story on how the Singularity skin came to be. After realizing that no one on the team could agree on what Singularity actually was, Khanolkar canceled its initial kickoff and, instead, had them brainstorm on “the skin’s thematic goals, desired emotion, and fantasy.”

“But what really brought us together was watching a video of a washing machine stuffed with bricks spinning out of control,” Khanolkar recalled. “That ridiculous video helped us find the one keyword to describe the feeling we were trying to hit — unstable.”

From there, the team agreed that Singularity was an unknown rock from another world and the eureka moment would be tied to its instability during animation sequences. Khanolkar explained this is how Singularity became the first weapon skin that had both an equip and reload animation, plus moving parts that animated on the weapon itself.

The Singularity weapon skin bundle will be available on October 13, alongside the launch of Act III.

READ MORE: Skye is Valorant’s most versatile agent so far