Only Skadoodle remains from the original roster. 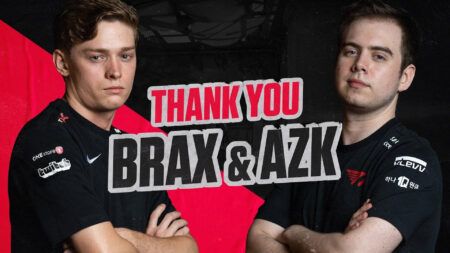 T1 has announced that they have parted ways with two initial members of its Valorant roster, Braxton “Brax” Pierce and Keven “AZK” Larivière.

Brax and AZK burst into the Valorant scene as one of the first former CS:GO pro players to make the switch by joining T1. The move made sense for the two players due to their long time Valve band for their part in the iBUYPOWER match-fixing scandal back in 2014.

Brax and AZK found immediate success when they won the Twitch Rivals: Valorant Launch Showdown, which featured the top teams and the biggest names in Valorant at the time. However, T1 has failed to capture similar success ever since then.

Aside from T1’s runner-up finish during the T1 x Nerd Street Gamers Showdown, the team has continued to produce weak tournament performances throughout the Ignition Series events in North America.

This forced T1 to make a dramatic shift by letting go of Victor “food” Wong and Austin “crashies” Roberts prior to the start of First Strike. T1 then added Sam “DaZeD” Marine and former Overwatch pro “Ha “Spyder” Jung-woo to the roster.

T1 had a stronger showing with its new roster by qualifying to the main event of First Strike NA. However, it was still not enough. They still lost to 100 Thieves in the quarterfinals of the tournament.

T1 struggles continued as they failed to qualify out of the open qualifiers of the first Challengers tournament. The team lost to Andbox in the round of 16. This forced the organization to make another change with the addition of CS:GO Major winner Timothy “autimatic” Ta to its roster.

Autimatic is now reunited with his former Cloud9 teammate Skadoodle, who was also part of the roster that won the Boston Major back in 2018. But with Brax and AZK now out of T1, this means there’s one more roster spot left to fill.

Autimatic is still considered one of the best players in CS:GO. In fact, just a few months ago, he was looking to move to Europe and play with CS:GO legend Robin “flusha” Rönnquist and Miikki “suNny” Kemppi, according to CS:GO insider Jarek “DeKay” Lewis.

The fact that T1 was able to pull autimatic into their Valorant roster out of nowhere means two things. T1 is pulling out all the stops to make sure the roster has the best chance at winning. This also means they could go for another big name to complete their Valorant roster.