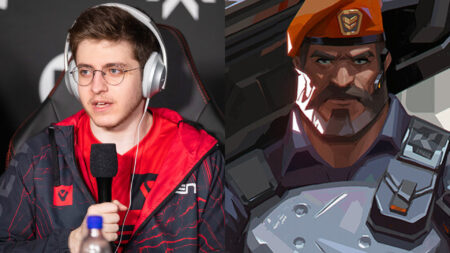 Sentinels Jared “zombs” Gitlin is one of the best controller agent mains in all of Valorant. He helped his team win Valorant’s first-ever international tournament when Sentinels dominated VCT Stage 2 Reykjavik.

In one of his recent streams, Sentinels zombs shared why he believes Brimstone is the worst controller agent in the game.

Sentinels zombs explains why Brimstone is a bad controller agent

When asked by his stream why the North American region doesn’t like using Brimstone, he responded, “None of the maps are good for Brimstone.”

Sentinels zombs clarified that it isn’t because of preference, he believes that Brim just isn’t as good as the other controller agents in Valorant.

Sentinels have only used Brimstone once in the 2021 VCT season

As the best team in North America, the only time Sentinels has used Brimstone was during a VCT NA Stage 1 Challengers 1 Open Qualifier match which they lost against Serenity 5-13.

Since then, Sentinels only used Omen, up until Astra was added into the agent pool for pro play during VCT NA Stage 2 Challengers 2. Sentinels even picked Viper as their main smoke agent on Icebox after winning VCT Stage 1 Masters.

One of Europe’s top teams, Fnatic, thinks otherwise. Fnatic’s captain and in-game-leader Jake “Boaster” Howlett was the one who created the Brimstone-Viper meta on Bind. This combo has helped his team take over the European region.

Fnatic Boaster believes that Brimstone is an S-tier agent on Bind, and that his Incendiary molly and ability to use three Sky Smokes at a time is valuable to the team. He also believes that Orbital Strike is the best controller agent ultimate in Valorant.

The last time Sentinels and Fnatic faced one another was during the VCT Stage 2 Masters Reykjavik where the North American squad defeated Boasters’ Brimstone-Viper combo on Bind by using an Astra-Viper tandem themselves.

If both teams qualify for the upcoming VCT Stage 3 Berlin international competition, we might be able to see them face off against each other, and if Sentinels zombs’ controller agent assessment is accurate.