Sentinels end the year with another tournament win. 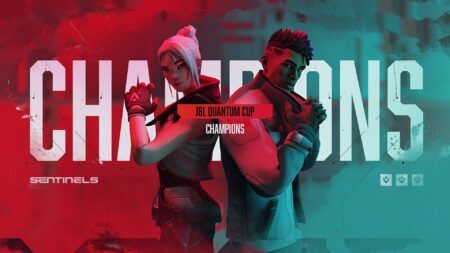 North American esports organization Sentinels proved they’re still one of the best teams in the region after winning the JBL Quantum Cup.

The tournament included all the big teams in NA such as TSM, Team Envy, Cloud9, and Gen.G. Sentinels also got their revenge against the reigning First Strike NA champions, 100 Thieves, in the semifinals.

FaZe Clan went on to advance to the grand final to face Sentinels after they outclassed Gen.G in the semifinals with a 13-6 win on Ascent, followed by a 13-8 victory on Bind.

Sentinels and FaZe Clan displayed an incredible first match, with both teams trading rounds consistently. Some rounds however, were so one-sided, like when Shahzeeb “ShahZaM” Khan scored an Ace early in the match after his team lost to an eco-round.

Sentinels would take a 7-5 round lead in the first half of Game One at Haven, but FaZe Clan caught up and forced an overtime. They won 7-5 against Sentinels after the half.

Sentinels would ultimately prove to be the better team by executing a perfect retake, defusing for the win on the 33rd round. They followed up with an excellent A-site push, and post-plant defense in the very last round of overtime.

In the final game of the series, Sentinels showed why they have an 86% win rate on Split by dominating FaZe, despite playing as attackers. After losing the pistol round, Sentinels went on an eight-round win streak to end the first half 9-3. Sentinel’s Cypher player, Michael “dapr” Gulino, even hit a ridiculous jumping 360 headshot on ZachaREEE.

Sentinels then closed out the tournament by taking the next four rounds as defenders to claim the JBL Quantum Cup.

Sentinels took home US$25,000 for finishing in first place, while FaZe Clan earned US$15,000 as the runner-up of the tournament.

READ MORE: Valorant global power rankings: 100 Thieves is the team to beat in 2021