Ice in his veins. 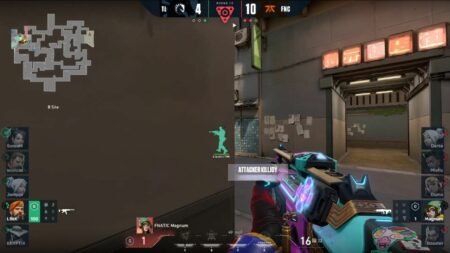 FNATIC has defeated Team Liquid in the Grand Final of the VCT Challengers Stage 2 Playoffs with a 3-1 score, and also pulled off one of the most clutch plays you’ll ever see, thanks to newest member Martin “Magnum” Peňkov.

Magnum joined the team just a little over a week before the playoffs, along with Nikita “Derke” Sirmitev. With such little time to adjust, many were apprehensive that the team wouldn’t have the synergy to win over Liquid.

With the score at 2-1 in FNATIC’s favor, the teams were playing map four on Split.

FNATIC usually ban Split, but they could not in this bo5 final where all maps are played. Conversely, it’s also one of Liquid’s favorites.

Fortunately, the decision paid off for FNATIC, and in Round 15, Magnum dropped his jaw-dropping ace with just 1HP left.

FNATIC went on to win the map, with a 13-4 score. This secured the series for them, and a slot to the VCT EMEA Stage 2 Challengers Finals, bringing them one step closer to Masters 2 in Iceland.