Hold up. Is Dan actually top-tier in Street Fighter V? The developers went about demonstrating all of Dan’s normal moves which looked decent enough. But of all of them, Dan’s standing heavy punch and overhead attack are expected to be moves that could give opponents serious problems. 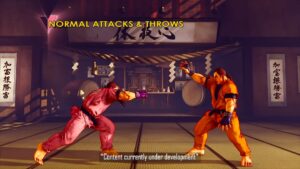 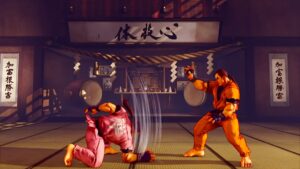 They then showed off Dan’s special moves, and fans saw the return of his chargeable Gadoken projectile that can travel farther, compared to his fireball in Street Fighter IV. Dan’s Airborne kicks are also back and still have strong corner carry mechanics.

For Street Fighter V, he has a new move called “Danretsuke,” which unleashes a flurry of strikes that knock opponents down. If players use the ex version of this attack, it will launch opponents into the air, and can also be utilized for juggle combos.

The developers noticeably got creative with Dan’s V-Skill, with both of them being taunts. They only showed one of these V-Skills, which allows Dan to cancel out of his special moves using a forwards or backwards roll. This move will be perfect for baiting opponent’s attacks.

Finally, after testing out a few of Dan’s target combos, they demoed his Critical Art, which is a super taunt, reminiscent of the character’s previous supers during the Street Fighter Alpha period. Unfortunately, they didn’t show what it actually does, but the developers did tease that something special might happen if you let the entire animation play out.

You can watch the full character preview here:

Dan is the first Season V DLC character scheduled for release sometime this winter. He is shaping up to be a welcome addition to Street Fighter V: Champion Edition. The remaining, upcoming DLC characters are Rose, Oro, Akira from Rival Schools, and a final character that has yet to be announced.

READ MORE: Who is Akira Kazama and why is she coming to Street Fighter V?