Debuting in December at the FIBA Esports Open II. 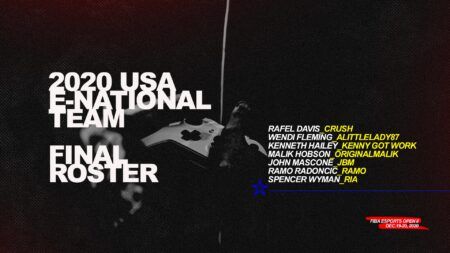 USA Basketball has announced the inaugural 7-player roster for the USA E-National Team, which will debut in December in the 2020 FIBA Esports Open II’s North and Central America Conference.

The creation of the 2020 USA E-National Team marks the organization’s first foray into esports. The team will face off against esports teams from Canada, Costa Rica, the Dominican Republic, Guatemala, Honduras, and Puerto Rico.

“USA Basketball is excited to take this first step in becoming a part of the gaming community and the FIBA Esports Open,” said Jim Tooley, USA Basketball CEO.

The field of competition has expanded significantly in the tournament’s second season, growing to a total of 38 national teams distributed across seven conferences.

The Europe Conference is scheduled for December 12-13, while the North and Central America and South America Conferences will take place on December 19-20. All games will be streamed live on FIBA’s Facebook, Twitch, and YouTube channels.

READ MORE: Lakers Gaming will have the first pick in the 2021 NBA 2K League Draft