The Adidas Dame 7’s are in-game before they’re in stores. 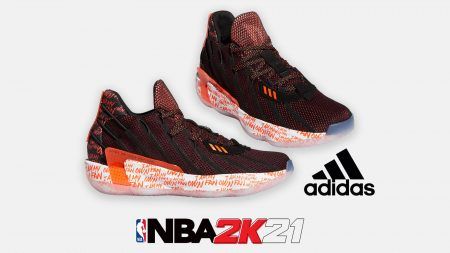 Last weekend saw the much-awaited launch of NBA 2K21 for current generation gaming platforms. But while one hype died down with the game’s arrival, another one was just about to begin.

Lillard can be seen wearing the Adidas Dame 7 by default in NBA 2K21 games, while players can also lace their own pair in the game’s MyPlayer mode.

The in-game version of the Dame 7s appear in the 2K-exclusive “I Am My Own Fan” colorway.

The new kicks will officially drop in October, but Adidas and the Portland Trailblazers star guard knew that the launch of the latest NBA 2K title is as good an opportunity as any to catch the attention of hoop junkies and sneakerheads around the world.

It didn’t hurt that Lillard had been making headlines in the weeks leading to NBA 2K21 Current Gen’s launch date.

Lillard and his Trailblazers squad was knocked out of NBA Playoff contention after facing the Western Conference top seed Los Angeles Lakers. But their exit didn’t come before a stunning Game 1 win over the Lebron James-led title favorites. Lillard’s remarkable play in the NBA Restart bubble earned him MVP honors for the eight-game seeding schedule.

The Adidas Dame 7 is expected to arrive on October 1 with a price tag of US$110.

NBA 2K21 Current Gen is out now for PS4, Xbox One, Nintendo Switch, and PC for US$60. The NBA 2K21 Mamba Edition, which includes the Standard Edition of the game for the upcoming next-generation PS5 and Xbox Series X consoles, is also now available for US$100.