He made the Aethereal Defender work. 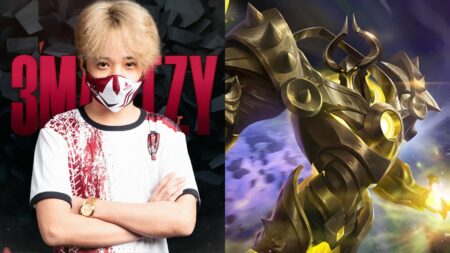 In the first game, 3marTzy picked Uranus. However, his team wasn’t able to notch a victory after a dominating performance from Jeymz’ 5/0/5 Esmeralda , and H2wo’s 9/2/10 Benedetta that earned him the MVP.

In game two, it was a different story. Chuu and the rest of the squad did well, but the best performer of the series is definitely 3marTzy. In game two, he played Uranus as an unkillable juggernaut and built Winter Truncheon.

He pulled a positive 11/1/7 KDA and disrupted the rotations of Nexplay Esports the whole match, which was a huge factor in the team’s win. He was unstoppable to the point where he got two double kills against Nexplay Esports’ core, H2wo.

3marTzy opted for a support emblem, Avarice, which gave him gold every time he damages an enemy. This gave him a sizable gold advantage in the early game.

Building Brute Force Breastplate as his first core item, 3marTzy was able to get a few kills and a double kill in the 7-minute mark with a 6/0/2 KDA.

At the nine-minute mark, Nexplay Esports was able kill four members of Work Auster Force. With 3marTzy the only one alive against three members of Nexplay Esports, he still got a kill and was able to survive, getting away scot-free.

Nexplay Esports wasn’t able to bounce back against heavyweight Uranus and the rest of the squad. Work Auster Force went on to win it all thanks to the unkillable 3marTzy.

Work Auster Force took the series to secure their first win on the big stage. Nexplay Esports, on the other hand, lost twice in a row this week after succumbing to Omega Esports earlier.