He scored a perfect KDA in both games. 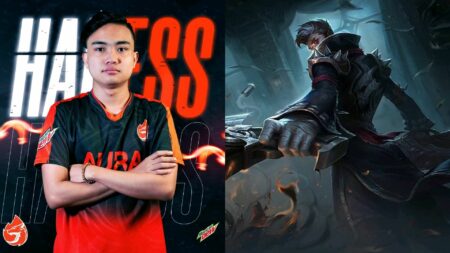 Sixth man Lord Hadess has proven himself to be an asset for Aura PH as they overcome Bren Esports 2-1 in the second week of the Mobile Legends: Bang Bang Professional League PH Season 7.

After losing the first game, Lord Hadess decided to pick Granger, which proved to be pivotal in their win against the M2 world champions. He recorded a 7/0/6 KDA in the second game, and 5/0/9 KDA in the decider.

While Granger may not be a top jungle pick like Lancelot, Claude, or Benedetta, recent buffs on his skills Rhapsody and Caprice made him a formidable marksmen that can be played either in the gold lane or jungle.

This was evident when his Granger made quick work of KarlTzy and the rest of the Bren squad in both games. His basic attacks were enough to quickly tear into the enemies defenses.

It was in the third game when Lord Hadess’ Granger, along with the combined effort of Jaypee’s Jawhead and Bennyqt’s Chou who peeled for him, exemplified a perfect game.

He was able to notch the first blood in the first minute of the match, which gave him a sizable advantage early on. Another kill in the sixth-minute mark was enough to snowball his team from mid to late game.

An uncontested Lord in the 10-minute mark added salt to the wounds of Bren Esports. Aura PH then pressured all lanes, forcing Bren Esports to a team fight.

After Aura PH managed to destroy all inhibitor turrets at 12 minutes, FlapTzy made a positional mistake, and was killed instantly after he jumped into a fight without his teammates, which led to the frontline of Bren crumbling due to the miscommunication.

A triple kill by Bennyqt’s Chou sealed the deal for Aura PH as they reversed swept Bren Esports, extending their losing streak.

Aura PH now sits at the top of group A with five points while Bren Esports is in third place with 2 points.

READ MORE: EVOS Legends coach Zeys: ‘I didn’t like the situation, so I restructured the entire ML division’