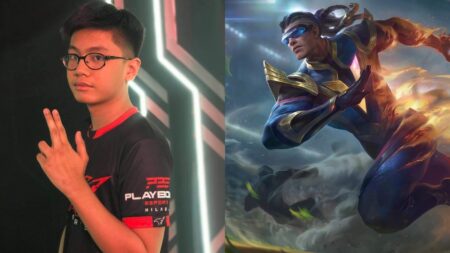 It’s only the first week of the Mobile Legends: Bang Bang Professional League Season 7, and many players are already showing promise in the tournament.

One player is Laus PlayBook Esports’ Aspect, who got the first maniac in the league with a stellar Bruno performance in the third game against Nexplay Predator Solid last Saturday evening.

In the decider match, Laus PlayBook Esports was dominating in all aspects thanks to Arvs’ Silvanna and Ryota’s Lapu-Lapu in the frontline, and Beemo’s Angela in the backline.

All three were crucial in setting up plays for Aspect’s Bruno, and Jake the Dog’s Claude to deal the maximum damage without getting killed.

The best team fight for PlayBook Esports was in the 14-minute mark where both teams were contesting the Lord. Aspect started attacking the Lord alone while his teammates waited by the river.

When Nexplay Solid members appeared on the upper side of the Lord, Arvs cast Imperial Justice on LanceCy. Renejay and the others made the mistake of jumping in the team fight during Blazing Duet and Wave of the World Animation.

And just like that, Bruno’s Aspect was able to notch the maniac, leaving Jeymz the last one standing on the side of Nexplay Solid.

The series of team fights and skirmishes proved to be too much for Nexplay Solid, who fell 1-2.

Aspect finished with a 10/1/2 record, earning him MVP honors for the match.