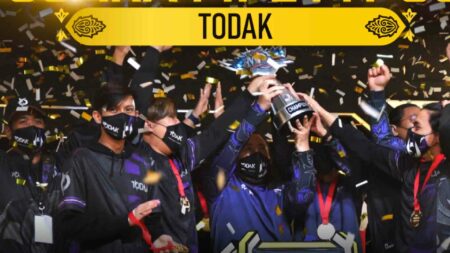 The redemption arc is complete for the renowned veteran Malaysian squad.

After finishing second in the last two seasons, Todak has proven they now have what it takes to be on top after a dominant performance at the Mobile Legends: Bang Bang Professional League Malaysia Season 9 (MPL MY Season 9) grand final.

Todak’s impressive performance at the MPL MY Season 9 playoffs

Todak didn’t drop a single game in the upper bracket, as they went up against defending champion Team SMG in the first round and Suhaz Esports in the second round, all thanks to the combined veteran experience of Muhammad “CikuGais” Danial, Zikry Bin “Moon” Shamsuddin, and Idreen Bin “Momo” Abdul Jamal.

On the other hand, Orange Esports fought tooth and nail in the lower bracket, taking on four teams, namely, RSG MY, Red Esports, Team Caracal, and eventually Suhaz Esports to secure a grand final slot.

In the grand final, Todak won the first two games after they pulled off crucial Lord steals during in the late game. Abd “Yums” Qayyum’ Khufra surprised by stealing Lord in game one, while Moon’s Dawning Light with Xavier stole it again in game two.

Moon took over the third game on Xavier, dictating the tempo and ending the match with a respectable 8/4/8 KDA to get the 3-0 lead.

Orange Esports’ Garyy extended the series to a fifth game after a dominant Paquito performance with a 13/5/5 KDA. This was, however, the last time Orange Esports would be victorious in this series, as they succumbed to the MPL MY Season 6 champions in the final game on the back of Momo’s 11/1/8 Wanwan.

Todak to represent Malaysia at MSC 2022

Aside from the cash prize, they will be representing the country in the upcoming Mobile Legends: Bang Bang Southeast Asia Cup (MSC 2022), along with second place Orange Esports.