The MDL pick-up turned into a stat-monster in the playoffs. 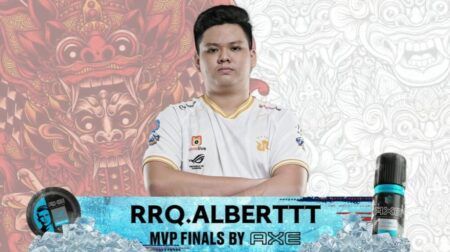 From zero to hero, Albert “Alberttt” Neilsen Iskandar has proven himself as the newest star of RRQ Hoshi. Once seen as RRQ’s weakest link and deemed unsuitable to replace hypercarry Xinnn, Alberttt rose through the ranks as the team’s youngest and most talented player.

Promoted from the MDL ID Season 2 team RRQ Sena, Albertt was able to show his capacity as a quality player and a worthy addition to the RRQ Hoshi roster. He even showcased his desire to bring RRQ to a back-to-back MPL ID championship and its third-ever title in the league.

During the playoffs, Alberttt was a determining factor in RRQ Hoshi’s victories. While he’s known for his use of assassins like Ling and Lancelot, he had some phenomenal action with Wanwan in the fifth game.

Together with these heroes, Alberttt also garnered some extraordinary statistics. The Bali player managed to get an average of 6.3 kills per match and an average of 691 gold per minute. Acting as a core in the team, Alberttt was also RRQ’s biggest damage dealer, dealing a total of 435,273 damage throughout the playoffs.

With Alberttt’s success on the playoff stage, he has been named the MPL ID Season 6 playoff MVP and earned himself a cash prize of IDR 28M (US$ 1,900).