Alter Ego nearly had them. 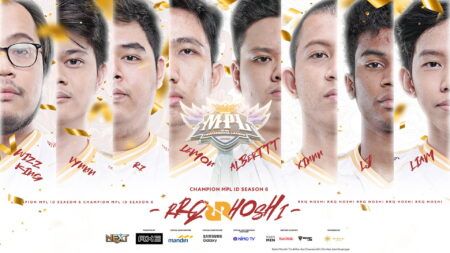 After going through eight weeks of the regular season and several play-off matches, MPL ID Season 6 finally concluded in an epic grand final between RRQ Hoshi and Alter Ego. Many saw the heated series as the perfect end to the sixth season because Alter Ego and RRQ placed first and second respectively in the regular season.

RRQ opened the first game with its iconic two-core draft of Roger and Ling. Meanwhile, Alter Ego took the hyper carry that had the highest win-rate for the team, Yi Sun-Shin.

Alter Ego held true to their identity by playing aggressively with consecutive picks. RRQ was not given the opportunity to breathe and refine their gameplay so they conceded the first game to Udil and the AE squad.

In game two, Ling moved to Alter Ego’s side while RRQ found a strong duo in Lancelot and Claude. Seeing as how they didn’t succeed in the previous game RRQ ditched the late-game orientation and went on the offense from the start. Alberttt appeared ferocious with his Lancelot and was able to deliver a balancing point for RRQ Hoshi.

Both teams upped the tempo for game three, executing consecutive fights in every lane. While Alter Ego was able to keep up in terms of kills, RRQ played more efficiently, bring the score to 2-1.

With RRQ now on championship point, Ahmad went on a rampage in game four, showcasing his deadly Yu Zhong. This game became a stage for Ahmad, who forced the match to move into a fifth and final game.

In the decisive game, the first five minutes were fierce. Both teams were equally strong, but RRQ was the first to get the inner turret after winning the team-fight.

Alter Ego was able to put their guard up throughout the game, but by the 42nd minute, RRQ Hoshi managed to conquer their opponents and clutch their way to a championship win.

With the series win, RRQ Hoshi makes history as the first MPL ID team to be back-to-back champions and three-time title-holders.

READ MORE: This weekend’s MPL ID S6 Playoffs will be an offline tournament