The Onic superstar shows you how to be the ultimate hunter. 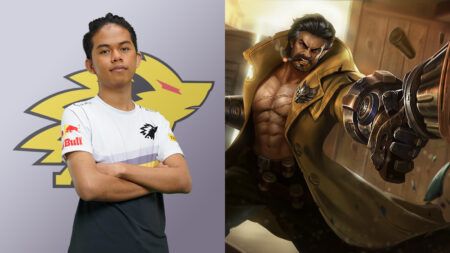 Gilang “Sanz” is a new face in Mobile Legends Professional League (MPL) Indonesia. The young Onic Esports rookie was a standout in MPL ID Season 6, and immediately stole the spotlight as the team’s hypercarry, utilizing crucial carry heroes like Roger.

If you aspire to be as good as Sanz, here are five essential tips that will turn you into the ultimate Dire Wolf Hunter.

The best emblem for Roger is the Assassin emblem since it provides him with some solid attacking benefits. To start off, you should max out the Bravery talent for some extra physical attack.

For Tier 2, you should opt for Bloodthirst for some spell vamp and, to cap things off, you should take Killing Spree for its healing and movement speed bonus. Regardless of your enemy’s role, Killing Spree will help you stay alive during prolonged fights.

As for battle spells, Retribution will be your best bet for a hypercarry Roger. It’ll make jungling easier and faster for you and provides you with a chance to steal other opponents’ buffs.

As a hypercarry, Roger relies on his first skill, Open Fire, to poke at enemies and zone them out. Seeing as how Hunter’s Focus just gives you a speed buff, you should prioritize maxing out Open Fire for the best burst damage.

With Open Fire, Roger will quickly fire twice, giving 300 (+120 percent of the total Physical ATK) points of total Physical Damage. The first Hunter Net slows down the enemy by 80 percent which lasts for 1.5 seconds while the second Hunter Net reduces enemy Physical Defense by 10 for 5 seconds.

As for combos, Roger’s basic combo is Open Fire followed with his second skill of Hunter’s Focus (increased movement speed). Even in Wolf Transformation, you can still do the same one-two skill combo since Lycan Pounce and Bloodthirsty Howl have similar properties.

3. Build Roger as an attack-heavy jungler

For Roger’s build, the first thing to do is create a level 2 jungle item to aid in dealing damage to creeps. After that, Sanz advised that you should take Swift boots for the attack speed.

Once you’ve gotten your jungle item to level 3, focus on buying Windtalker, Endless Battle, Blade of Despair, and Queen’s Wings to add some unique passives to your auto attacks.

If you’re in the late game phase, I recommend selling your Swift Boots or shoes to add another physical attack or defense item to bulk Roger up.

4. Take note of your targets before a team fight

With his incredible damage output, Roger is a dominant hero throughout the whole game but I do think that you need confidence to play the character properly.

While fear is not in Roger’s dictionary, you must take into account the number of opponents who are still alive before starting a team fight. In outnumbered situations, Roger is better off waiting for back up because he needs a partner during skirmishes.

5. Synergies and counters to Roger

When it comes to team composition, I think the best companions for Roger are heroes who can play a solid support role like Khufra, Pharsa, Chang’e and Valir.

When going against Roger, he is one of the most difficult heroes to counter. Not many heroes are given the ability to directly suppress Roger, but heroes like Khufra and Harith do prove to be a threat to the Dire Wolf Hunter.