5 pro tips to dominate with X.Borg by Onic Esports’ Butsss

Learn how to heat up with this fiery hero. 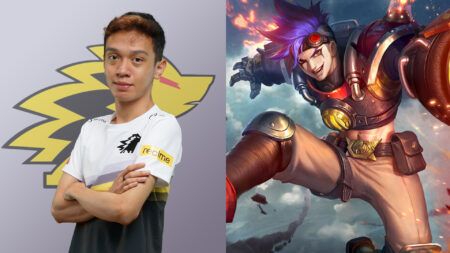 We asked Butsss to share some surefire tips that will help you master the Firaga Armor fighter.

1. Use Fighter, Flicker, and Fire Missiles

The best emblem that can be used for X.Borg is Fighter. In whatever situation that he will face on the battlefield, this emblem is the most suitable for the fiery hero.

As for your battle spells, your best options would be Flicker and Arrival for movement, but it all depends on your playstyle. If you’re still not comfortable with using those spells, just go with another spell that you’re more familiar with.

X.Borg’s first ability, Fire Missiles, will be the first to be maxed out because of its reliable damage output and easy application.

While his other ability, Fire Stake, is good for zoning, Fire Missiles provides the same zoning effect with continuous damage and a short cooldown (4 seconds). It’s also a great way to clear waves when laning.

I suggest making Bloodlust Axe first so that X.Borg has a solid amount of lifesteal.

After that, you can make Blade of Despair or Hunter Strike so that X.Borg’s damage can deal some significant damage to the enemy. Ice Queen Wand can also be an attractive option for X.Borg to present a slow effect on opponents.

Changes to items can be made depending on the enemy team’s composition. If their lineup consists of burst-damage heroes, X.Borg’s damage items can be replaced with defense items so that you can be more durable in the long run.

In terms of basic combos of X.Borg skills, it all depends on the situation at hand in the Land of Dawn. In terms of attack and defense, the basic combos are slightly different.

The combination of one, two, and ultimate skills can be done when you launch an attack on a specific player. With Last Insanity providing a quick dash before its big explosion, you can easily manuever into low-health opponents with it and use your other skills to clean up the fight.

When you’re on defense, a combination of two skills and ultimate can be applied immediately. If you see the enemy team in the same area, X.Borg’s ultimate is a great initiator while his Fire Stakes and Fire Missiles provide some extra AoE damage to deter your enemies from advancing.

4. Understand your role in the game

When looking at your macro-play, X.Borg has slightly different tasks in the early and lategame phases.

After clearing the lane, X.Borg must immediately move to another lane to help in such things as double-teams and taking down objectives like Turtle. As a stronger fighter hero, X.Borg is very reliable in initiating warfare.

In the late game, X.Borg’s true damage is very large and useful, making him the perfect answer to the opponent’s front line in clashes.

5. Synergies and counters to X.Borg

If you’re playing with an X.Borg, initiator tank heroes with high stun and CC (crowd-control) abilities like Tigreal are the perfect match for him. In a team composition, the duo will provide a tough front-line with some solid damage coming from X.Borg.

To counter X.Borg, you can use heroes who have the ability to dive and burst damage. Burst-damage heroes like Chou, Pharsa, or Gusion will destroy X.Borg’s armor in no time.

READ MORE: Amidst Onic’s ups and downs, Sanz has stood out