And what does Spongebob have to do with this?? 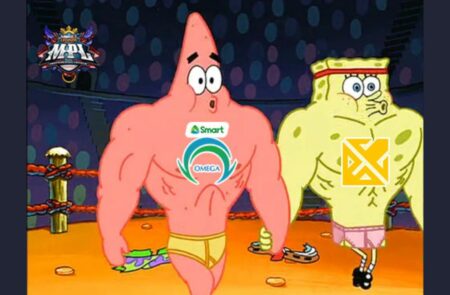 MPL PH is getting personal, as Omega Esports and Execration fight for the right to be called Bren Esports’ best friend.

The Filipino teams decided to add a bit of levity to the social media news surrounding MPL PH Season 7, especially after a strong warning was issued by Moonton regarding inappropriate posts and comments.

Omega Esports started the trend by sharing a meme about their friendship with Bren Esports and the upcoming matches. After Bren Esports’ 0-2 loss to Nexplay Esports, Omega vowed to take revenge on behalf of their best friend Bren, as they were to face Nexplay in an upcoming match.

Omega then proved their friendship to Bren by defeating Nexplay, 2-0.

Trouble struck the bestest of friends however when Execration posted a status message claiming Bren as their best friend. ONIC Philippines also got on board the trend and posted that they were looking for a friendship like Execration and Bren Esports’. Filled with jealousy, Omega made their thoughts known on social media.

“We’re the real besties,” Omega told ONE Esports. “We both have Tzy’s (Hi KurtTzy!), and we shared so many feelings with each other during weekly swab tests during M2 and got to bond while traveling in Singapore.”

With Omega’s next match against Execration, they asked Bren to fight for them. Bren defeated Execration 2-1, and asked Omega, “We good bestie?” along with the following image.

But who is Bren Esports’ real bff? According to FlapTzy in a post-game presscon, it’s actually Execration. While they might have shared lots of memories with Omega, the bond between Execration and Bren goes way back.

“We go on lots of outings together,” KarlTzy added.

“What about ONIC? Or Aura?” asked Coach Ducky.

“So sorry, Omega. It’s not you, it’s me,” Bren captioned on the post. Omega can’t be happy about this!

Jokes aside, the memes and humor have caught on and given a new, comedic storyline to MPL PH Season 7. The levity has also helped mitigate the tension between teams as the group stage progresses.

Will the besties make up? Will Omega find a new best friend? We’ll find out as MPL PH resumes on April 9.