A lot of lessons learned along the way. 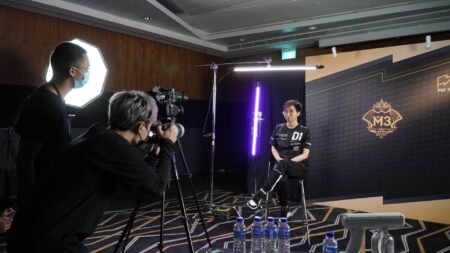 But perhaps the biggest upset that happened was seeing MPL PH back-to-back champion Blacklist International drop to the lower bracket after losing to North America’s BTK.

It was a difficult pill to swallow for the squad. However, according to Johnmar “OhMyV33nus” Villaluna, losing against them made them a realize what their goal truly is in the tournament.

In an interview, the squad’s team captain revealed that losing to BTK in the upper bracket playoffs turned out to be a good thing.

“The loss against BTK was an eye-opener. We were always winning before, from MPL PH Season 7, Season, 8, ONE Esports’ MPLI 2021, and MSC, and it came to a point where we almost forgot why we were playing in the first place,” he said.

“After we lost, we held an open forum with the team to discuss why we lost. Then, we regrouped much like what we did since Blacklist International was formed,” OhMyV33nus added.

The team was was able to survive another day in the lower bracket after eliminating ONIC Esports in a 2-1 thriller.

“Ever since we lost against BTK, we tripled, even quadrupled our efforts and preparations that’s why we’re excited to play again,” he stated.

According to OhMyV33nus, he is eager to face the team who sent them to the lower bracket playoffs.

“Ever since we came to Blacklist International, we haven’t been defeated by the same team twice. So, I’m looking forward to facing BTK again,” said OhMyV33nus.

Blacklist International could face BTK the earliest in the lower bracket quarterfinal if BTK loses in the upper bracket semifinal against EVOS SG on December 16.

They will next face Indonesian powerhouse RRQ Hoshi in the fourth round of the lower bracket on December 17, 2 p.m. GMT+8