Learn the ways of the ninja. 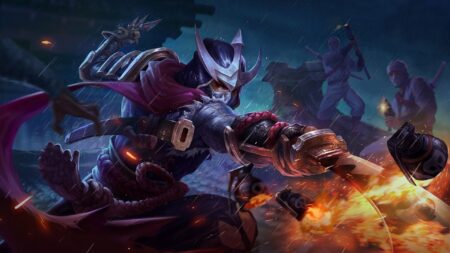 Hayabusa has always been a safe pick in Mobile Legends: Bang Bang. As an assassin, the Land of Dawn’s very own ninja can quickly kill enemies all while dashing in and out of a team fight.

However, you may be having a difficult time understanding his kit. Don’t fret! Here is a quick guide on how to master the Crimson Shadow in MLBB.

Before we dive into his playstyle, let’s take a crash course on Hayabusa’s skills.

For the remaining hits, the damage is reduced to 30%. Each hit restores 10 energy for him (capped at 2 times) and slows the enemy by 35% for 2 seconds.

Hayabusa moves in a designated direction and releases a phantom behind him. If he hits an enemy in the patch, he will stop immediately and release 3 phantoms that travel in different directions.

When phantoms hit enemy heroes, they will seep into the, dealing 130 (+30% extra physical ATK) physical damage and slowing them by 40% for 2 seconds.

Use again: Hayabusa can teleport to a phantom’s location. If the phantom happens to be in an enemy hero, Hayabusa will deal 130 (+30% extra physical ATK) extra physical damage to it.

Every time Hayabusa moves using Quad Shadow, the CD for Phantom Shuriken will be reduced by 1 second.

Hayabusa turns into a shadow and dashes around the battlefield, dealing 5 single-target attacks to enemies in an area. Each attack deals 180 (+90% extra physical ATK) physical damage.

Tips and tricks for Hayabusa

The Crimson Shadow is often played as a jungler, but many are now trying him in the EXP lane.

Get Retribution if you plan on playing him as a jungler. In the EXP lane, Execute is the best Battle Spell to go along with your damaging skills.

Hayabusa synergizes well with the assassin emblem. You can pick between High and Dry and Killing Spree.

High and Dry works perfectly since Hayabusa excels at 1v1 skirmishes, while Killing Spree provides HP and speed boost with each kill, increasing his survivability in team fights.

War Axe is a must for the Crimson Shadow right now, for its passive increases your killing potential especially when you cast Ougi: Shadow Kill.

His core items are Endless Battle for the lifesteal and survivability, Blade of Despair for massive damage, and Malefic Roar when you’re up against tanky enemies.

When it comes to the jungle blessing, it’s best to go with Bloody Retribution as it helps you absorb HP from an enemy hero which can make or break in crucial team fights.

A basic combo would be to use Ninjutsu: Quad Shadow towards an enemy, then Phantom Shuriken to stack up Ninjutsu: Trace of Shadow before going all-in with Ougi: Shadow Kill.

Always make sure to leave a phantom behind in case the enemy tries to fight back after you cast your ultimate. You should also keep a keen eye on the enemy’s position and find a good opening to teleport on your phantom.

Do take note that teleporting to a phantom where an enemy is also deals damage.

You can also try to bait your enemies by using Ninjutsu: Quad Shadow towards an them, cast a Shuriken, then immediately teleport to the furthest shadow. This gives you high poke potential, and you can always teleport back near the enemy if he has less than 30% health to get an easy kill.