Hunt your foes down with Roger’s futuristic Cyber Werewolf skin

It’s a full cyber-moon in the Land of Dawn. 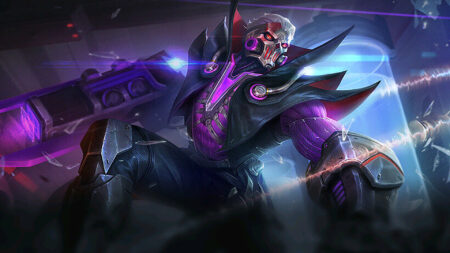 Despite being a favorite pick in the jungle, get ready to see Roger shuffling through a futuristic cityscape with Mobile Legends: Bang Bang‘s new cyberpunk-style skin, Cyber Werewolf.

Cyber Werewolf turns Roger into a cybernetic marauder, equipped with a purple laser cannon that shoots steel traps, a sleeveless leather trench coat, and a skull-shaped gas mask. His skin also emits a purple hue to nail down the cybernetic aesthetic.

As for his gameplay, Roger now shoots flashy lasers and energy orbs during auto-attacks and his first skill Open Fire. When he uses Hunter’s Steps, the Cyber Werewolf leaves a glitchy trail as he chases down his prey.

In Wolf Transformation, Roger lunges toward his opponent and turns into a mecha-style werewolf, complete with glowing fur, purple claws, and gradient claw marks. On impact, he emits a colorful explosion that is bound to earn him some extra kills.

Lycan Pounce produces a darker glitch trail when Roger dashes through obstacles. Last, but not least, Bloodthirsty Howl flashes a wolf emblem over Roger’s head with a few holographs and has him running on all fours to deliver the final blow to his wounded enemy.

Cyber Werewolf Roger will be coming soon to the Mobile Legends in-game store.