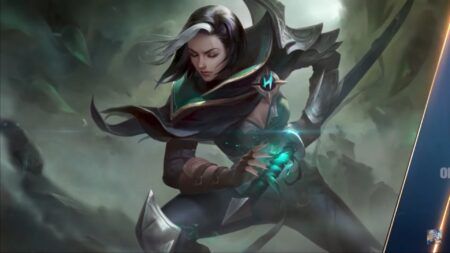 To celebrate the release of Mobile Legends: Bang Bang‘s 100th hero, Moonton is giving away Benedetta for free. She is the only female assassin hero that will be released this year, so be sure to redeem her.

Benedetta’s key trait is her outstanding mobility thanks to her passive, which provides her with a dash and decent damage.

If Benedetta releases the Basic Attack button after her Sword Intent is fully charged, she will use Swordout Slash in the direction she’s facing and dash forward, dealing physical damage to enemies.

Benedetta leaves a shadow in front, and withdraws swiftly. After a short delay, her shadow will slash forward, dealing damage to enemies in the fan-shaped area which also slows them down.

Second skill – An Eye for an Eye

A common English expression “an eye for an eye, a tooth for a tooth”, it means punishing the offender for what the victim has suffered.

Here, Benedetta raises her sword to ward off enemy attacks, gaining Control Immunity and blocking damage from the enemy source for a short period. After which, she will stab in the targeted direction, inflicting physical damage on enemies hit.

The skill contains a parry mechanic that allows Benedetta to deflect the enemy’s attack, returning damage to the enemy. This only works if the enemy deals damage or casts a control skill on her.

Benedetta stabs forward with her sword, Alecto, during which she gains invincibility and slows down all enemy targets within the area of effect. For the next 2.5 seconds, enemies in the area will take physical damage and become further slowed.

Her ultimate serves as a team fight tool, as it deals continuous damage to enemy targets. With a proper skill combo, she can dish out massive amounts of damage in a team fight.

Are you ready to dance with MLBB’s only shadow ranger? Redeem her for free in-game from November 7 to 8.