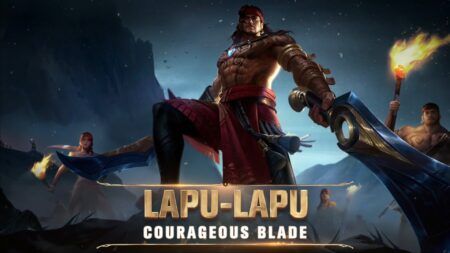 The latest Mobile Legends: Bang Bang hero to receive a revamp is none other than Lapu-Lapu, the Courageous Blade.

With this rework, this fighter-assassin has been granted more flexibility to switch between the twin blade stance and heavy sword stance. He can use his twin blades to harass enemies from a distance, while still having the versatility to go in for close quarter combat and assert crowd control.

Each time Lapu-Lapu deals damage, he gains Bravery Blessing; halved from non-hero units. When he reaches full stacks, Lapu-Lapu’s next basic attack or Justice Blades will be enhanced. This also grants him a shield, so pay attention to your secondary bar!

Lapu-Lapu throws out two boomerangs in a designated direction. Both of them deal damage to any enemies in their path. Because the blades move away from Lapu-Lapu in a semi circle, you can position them such that it hits an enemy up to four times.

As Lapu-Lapu gathers strength through his heavy sword, enemies under the sword’s shadow will be slowed.

Then, Lapu-Lapu strikes down with the sword, dealing damage to enemies that it hits and stunning them. Land Shaker is a thick linear AoE spell that takes time to wind up, so timing is crucial to maximize it.

Lapu-Lapu charges in a designated direction, slashing with his twin blades and dealing damage to enemies in his path. Hitting multiple enemies with Jungle Warrior allows Lapu-Lapu to charge his passive.

Lapu-Lapu whirls his heavy sword, dealing damage to enemies. For each enemy hero hit, he gains a certain portion of damage reduction, so it is highly effective against a crowd of enemies.

Lapu-Lapu leaps into the air, combining his twin blades into one. When he lands on the ground, he deals damage to enemies in the area and slows them down. After that, Lapu-Lapu will enter the Heavy Sword stance with enhanced skills and increased basic attack damage.

Greatest Fighter grants him five times the amount of Bravery Blessing compared to other skills.

Lapu-Lapu releases three continuous slashes forward with his heavy sword, during which he will be immune to crowd control effects. After each slash, he can change direction and move slightly.

In the heavy sword stance, this skill is your greatest source of damage. Even though it has a high skill cap, the damage you can do in a teamfight will be unmatched.