Control the forces of nature with Blizzard Storm Vale

Unleash your inner superhero with this skin. 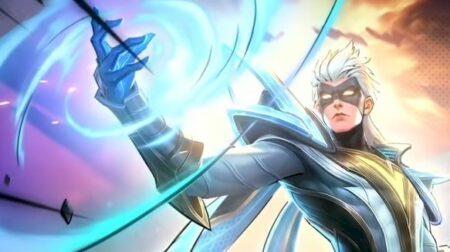 It’s about to get a lot windier in the Land of Dawn as Mobile Legends: Bang Bang has teased the newest superhero skin, Blizzard Storm Vale.

In a video posted on YouTube, Vale can be seen wearing a typical blue superhero outfit, similar to the previous superhero skins such as the outfit worn by Thunderbolt Chou and Swordmaster Lancelot.

He also finishes the look with a two-part cape on his back and a superhero-signature eye mask to hide his identity.

Much like the previous trailers, Vale can be seen fighting hordes of zombies and alien-like creatures in the city, unleashing his tornado powers on helpless foes.

All of his abilities including Windblade, Windblow, and Windstorm have new effects depending on what upgrade you go for. The offensive enchantments let you cast red winds with comic texts such as WOW and BLAST.

The defensive enchantments, specifically those with crowd control, let loose a gush of blue winds that have their own superhero-effects as well.

Blizzard Storm Vale will be available soon in the in-game client.

READ MORE: Xinnn: ‘Alberttt personally asked me to come back to RRQ Hoshi’