Blacklist’s BON CHAN on facing BTK: ‘This will be a fun match’

The upper bracket showdown is lit! 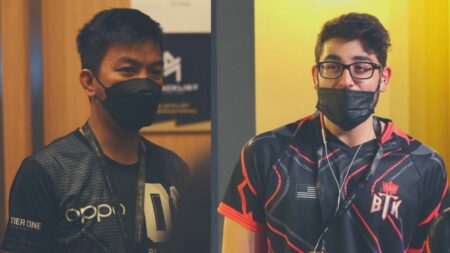 Despite Blacklist International’s high chances of going far in the upper bracket, the MPL PH Season 8 champions won’t be complacent, especially in their first round matchup against North America’s BTK.

This is according to their head coach Kristoffer “BON CHAN” Ricaplaza, who shared how his team is preparing for the upcoming Mobile Legends: Bang Bang M3 World Championship playoffs.

In an interview with ONE Esports Philippines, the two-time MPL champion head coach talked about BTK’s performance in their scrimmages with Blacklist International.

“We’re equally matched in our latest scrims. This will be a fun match,” BON CHAN said.

He also added that his players are aware that their first round match against BTK will be challenging, along with all the other qualified teams in the upper bracket.

“I’m sure that the games [in the upper bracket] will be a lot more harder compared to the first day,” he stated.

BTK showed how prepared they are going into the M3 World Championship after securing crucial wins against Navi and SeeYouSoon in Group C. With two wins under their sleeve, they secured an upper bracket slot.

BON CHAN also admitted that their dominant run in the group stage is a ‘confidence-booster’ and hoped that other teams realize that Blacklist International is all eyes on the prize.

“It’s so that our future opponents will be nervous with how well we performed,” he added.

BON CHAN also stated that the results of their practice is going well and he hopes that it will translate well in winning the championship.