Step right up into a trendy new world that dresses up League of Legends champions to a spacey, retro vibe that makes them look like they are about to start quoting lines from The Breakfast Club and begin grooving to Whitney Houston’s “I Wanna Dance With Somebody.” 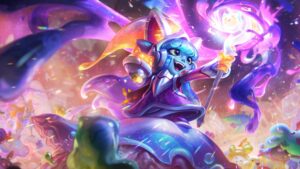 As for Space Groove Ornn, his deep, raspy voice doesn’t quite match his super cute and bubbly appearance. Space Groove is actually Lux’s 13th League of Legends skin and it shows her in a refreshing concept where she appears to be a real doll with her Barbie-like hair color, a hairstyle that screams Sailor Moon, and a glowing wand with mini disco balls on each end.

From the skin line’s 2022 release, Space Groove Taric and Gragas caught our attention with their loveable designs and clean animations. Taric, in particular, fits the concept perfectly and looks extra fab with his pink hair and disco-ball staff. Casting Taric’s ultimate, Cosmic Radiance, embraces allies in a magical, holographic sphere. 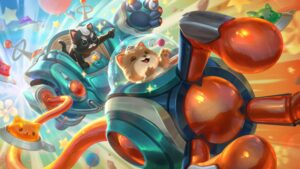 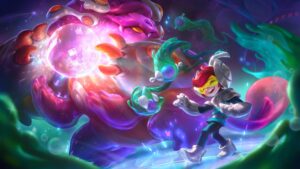 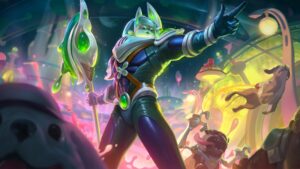 As for the Space Groove Nasus skin, his Spirit Fire skill might just be the cutest thing we have ever seen. It has been transformed to look like a giant vinyl record with his corgi form at the center hole. It gets better when he casts his Fury of the Sands skill with popping colors of purple and magenta and floating teal blobs reminiscent of lava lamps back in the 80s.

After seven years, Riot Games has finally made the Disco Nunu meme a reality with the Space Groove Nunu & Willump skin. Disco Nunu was created by League of Legends player PornstarZilean7 back in 2015 where he built items and Summoner Spells like Clairvoyance and Sweeping Lens to provide a makeshift disco ball light to the pair.

In 2022, Riot released Space Groove Lissandra, the antagonist in this skin line. Lissandra is the leader of the Harsh Vibes, a group that conquers planets rich in The Groove. The Frostguard leader looks nothing like a mighty conqueror, but instead, appears as an eccentric DJ Sona in her Space Groove getup.

From an ice queen to a dancing queen, the designers nailed down the skin’s design. 80s kids, can you name the retro home decor that inspired the base of Lissandra’s body?