From signing bigtime streamers to producing its very own Gucci backpack, LA-based lifestyle and esports organization 100 Thieves has become a melting pot of pop culture.

In the org’s latest collaborative video with the LCS (League of Legends Championship Series), CEO Matthew “Nadeshot” Haag teams up with two-time Grammy Award winner Lil Nas X to hype up the Worlds 2021 run of 100 Thieves.

How the worlds of 100 Thieves and Lil Nas X collide

Though Lil Nas X is a world apart from competitive League of Legends, the collaboration came to fruition through the advent of social media.

Right after winning the 2021 LCS Championship, 100 Thieves were celebrating whilst listening to the tracks of the Montero superstar, as seen in Nadeshot’s viral Instagram post.

100T streamer and co-owner Jack “CouRage” Dunlop further elaborated on how Lil Nas X was an influence on the team’s success.

“It’s the hero song for our LCS team and their championship in the 2021 Summer Split,” said CouRage in the BTS video. “Industry Baby is the first song that they always played, and it’s their hype music.”

Once the two parties got to know each other through Twitter, 100 Thieves brought the music artist over to the Cash App Compound to meet in person.

By combining their star powers, 100 Thieves released a stunning hype video that featured the music of Lil Nas X, namely “That’s What I Want” and “Industry Baby”.

While it might seem like the usual artist feature that many gaming and esports entities already do, 100 Thieves pushes the envelope by portraying a more thorough collaborative experience.

The side that appreciates Lil Nas X and music 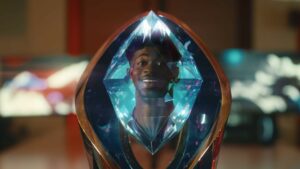 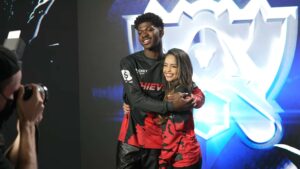 The first segment of That’s What I Want captures the initial musical experience that Lil Nas X provides.

The video shows 100T employee JhbTeam jamming out to the track while Lil Nas X sings inside the LCS trophy (yes, that’s correct).

Even in the BTS scenes, you can see how Lil Nas X’s appearance left many of 100T’s biggest stars in awe. YouTube streamer and 100T co-owner Rachell “Valkyrae” Hofstetter said, “I’m trying so hard not to fangirl.”

Though simple in its premise, the segment shows the influence of music on our everyday lives and how Lil Nas X inspires a range of listeners, even those in the esports atmosphere.

The side that appreciates 100 Thieves and esports

The Industry Baby segment then brings it all home by merging a culture of champions.

Instead of holding up plaques and Grammy’s, Lil Nas X dons the 100T jersey and effortlessly cradles the LCS trophy, embodying the passionate esports fan in all of us.

We especially like the video’s wholesome factor. Nas is by far one of the biggest music artists of North America to date, but brings a lovable, down-to-earth charm to the esports collaboration.

Seen cracking jokes while holding the trophy, he surprises the 100 Thieves LoL team via video call, and asks Nadeshot if he can keep the 100T jersey, Lil Nas X proves that you don’t have to be a beast in the mid lane to enjoy esports.

At the end of the day, the collaboration shows how inclusive both scenes can be in celebrating monumental achievements.

“And this one is for the champions.”