Team Liquid qualified as the second NA seed at the League of Legends World Championship (Worlds 2021), which apparently merited another hype music video.

The song lyrics envisions Team Liquid’s dominance at Worlds, where other regions chant #NAmen. Ovilee May is just so good at delivering a new kind of energy that sparks hope in the heart of every LCS fan.

Raz and CaptainFlowers deliver hot bars about LCS and other regions 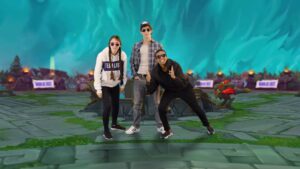 Raz takes the spotlight during the song’s chorus, belting out a lower-pitched melody about Team Liquid exceeding expectations, and handing the L to other teams.

Known for his quick wits on broadcast, CaptainFlowers dished out some killer lines in Worlds Baby too.

Riding out the Rift on Skarner, his signature champion, CaptainFlowers spits fire about MAD Lions fans being “BAD liars” and how LCS teams will “make you jokers look like y’all belong in Play-Ins”.

Ocelote makes a priceless cameo in the Worlds 2021 music video

If the triple threat of LCS personalities wasn’t enough, Ovilee May even brought in G2 CEO Carlos “ocelote” Rodríguez Santiago during a quick verse.

Though the song poked fun at G2 Esports missing Worlds 2021, ocelote quickly clapped back with his own witty remark.

You can check out the full music video featuring CaptainFlowers, Raz, and Ovilee May down below: