LEC off-season report card: G2 Rekkles is the best thing to come out of the post-Worlds shuffle

Plus all the fresh faces you need to know next season. 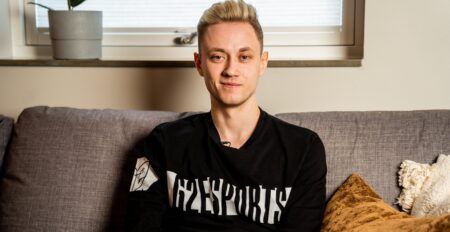 Fans may have just experienced the craziest League of Legends off-season shuffle this year, from icons retiring to star players transferring to other regions. With just a few more weeks before a new season begins, almost all teams are already done with their contract signings and have finalized their competitive rosters.

We took the liberty to create these report cards that contain all the roster changes for the League of Legends European Championship (LEC). Don’t worry, nobody received the dreadful F grade!

Perhaps the biggest off-season shocker in the LEC was G2 dropping Luka “Perkz” Perković and picking up one of the best bot laners in Europe, Martin “Rekkles” Larsson.

The off-season could have been a disaster for G2 after losing Perkz, but Rekkles joining more than makes up for losing Perkz, and for that, we’re giving them a high grade.

Rekkles revealed that he chose to play with G2 because he thinks they have the highest chance of winning Worlds.

“Up until this point I always thought they (Fnatic) were the team to play for, I didn’t see G2 coming like this,” said Rekkles in an interview with G2.

During his years with Fnatic, we’ve seen great synergy between Rekkles and his former support Zdravets “Hylissang” Iliev Galabov. How will he fare with his new bot lane partner Mihael “Mikyx” Mehle on G2?

The black and orange team signed Elias “Upset” Lipp to replace former star player Rekkles for the 2021 season. Upset has been a pretty reliable bot laner in the past and is considered one of the most sought-after young talents in the LEC, but it remains to be seen if he can fill Rekkles’s shoes.

We’re expecting great synergy with him and Zdravets “Hylissang” Iliev Galabov since Upset and Hylissang both have the same playstyle.

Fnatic signed a solid and reliable mid laner in Yasin “Nisqy” Dinçer from Cloud9 and coach Jakob “YamatoCannon” Mebdi to complete their roster.

“When I was starting to talk to Fnatic about motivations as to why I wanted to join Fnatic. One of them was Rekkles,” revealed YamatoCannon. “Still, to this day, Rekkles is still one of those motivations because I want to beat him more than anything now.”

This roster has a lot of potential, but they’ll need to prove they have the synergy to live up to it.

Schalke 04 lost three members of the roster that went on a miracle run to end the Summer Split but added Dino “Limit” Tot from SK Gaming, and upgraded their top lane position in ex-TSM player Sergen “Broken Blade” Çelik.

“I’m joining because I think we will win,” said Broken Blade. “You can just really see that from that miracle run that they did. The cool thing is, coming from TSM from our last miracle run, like Playoffs run, right? It was similar to what Schalke had done. I want Schalke to just straight up dominate the scene.”

Meanwhile, Limit is a good pick-up for the team and can definitely keep up with their competent bot laner, Matúš “Neon” Jakubčík.

Overall, Schalke 04 remains a team with lots of potential, but it remains to be seen if they can build on their success from last season. Gilius is a rising star in Schalke 04 and is backed up by their solid mid laner Abbedagge as fans have seen during the Summer Split.

Let’s all do the chant:

Gilius, Gilius
King of Lee Sin,
Ascend to godhood
And grant me this win!

MAD Lions may have been sent home early at Worlds this year, but bear in mind that this bunch of rookies are just getting started on their LEC journey! 2020 was a great year for them after handing G2 an upset and stepping on the international stage for the very first time.

Armut and Supermassive were definitely the stronger team when they faced off against MAD Lions in the Worlds 2020 Play-Ins stage. They kicked the LEC 4th seed team from the competition and showed unexpected dominance early on on the international stage, all of which would not have been possible without Armut.

We can’t wait for the Glad Lions drawings from this roster!

After playing with Team Vitality for half a decade, Lucas “Cabochard” Simon-Meslet decided to part ways with the squad. He will be replaced by up and coming 19-year old player Mathias “Szygenda” Jensen.

Meanwhile, Team Vitality supporters are quite hyped for the return of French player Duncan “Skeanz” Marquet, one of the LEC’s favorable junglers. He was sent back to the La Ligue Française (LFL) before the LEC Summer Split started to further hone his abilities. Skeanz and his academy team Vitality.Bee finished sixth place at the LFL Summer 2020.

When it comes to their other members, Aljoša “Milica” Kovandžić is a fairly reliable mid laner, while Labros “Labrov” Papoutsakis is arguably one of LEC’s pretty solid support players. His Thresh stands at a 62.5% win rate last season.

Losing Cabochard’s veteran leadership will definitely hurt the team, but there is lots of potential here in their young up and coming players. If Szygenda can match his performance at the EU Masters Summer Main Event, and Skeanz can reach his potential this team could be one to watch.

With Marc “Caedrel” Robert Lamont retiring as a player, the former jungler will be replaced by another UK player, Daniel “Dan” Hockley.

Picking up European Masters 2020 Summer Main Event champion, Paweł “Czekolad” Szczepanik, is a great move for the team, and will be a big upgrade at the mid lane position. Czekolad seems to be quite the beast when it comes to using Orianna to which he gained a huge 76.9% win rate last season.

Expect to see these young lads show their potential with mid laner Patrik “Patrik” Jírů on the lead.

Watch out, 2021 — next year might be the year of Misfits Gaming with the addition of ex-Rogue star support Oskar “Vander” Bogdan to its roster. We’re excited to see his synergy with legendary bot laner Kasper “Kobbe” Kobberup who returns after spending last season with TSM in the LCS.

In the past, Kobbe was branded as Mr. Consistent for playing seven straight splits (for four years) with Splyce (now MAD Lions). He’s a good player known for his early game dominance. The Kobbe-Vander bot lane combo should be a good investment for Misfits especially since Vander is easily one of the best supports in Europe.

Meanwhile, Tobiasz “Agresivoo” Ciba has been promoted from Misfits’ academy team to its main League of Legends roster. He was a beast at the LFL and the second-best top laner at the EU masters next to Syzgenda.

Misfits Gaming has a fairly reliable roster, with two other top-tier rookie players at their disposal.

Formerly known as Origen, Astralis has overhauled their roster and has dropped all but one player, Erlend “Nukeduck” Holm!, from their 2020 LEC team.

Gambling on unproven players is a risky strategy, but it might pay off for Astralis, and at least, they can’t do any worse than last year.

An essential player to Schalke 04’s miracle run last season, Andrei “Odoamne” Pascu is bringing his A-game to LEC 2020 Summer Split first-placers Rogue. He is definitely a clear upgrade from Finn “Finn” Wiestål as Odoamne is considered as a very reliable and rock-solid top laner in the LEC.

With Steven “Hans sama” Liv still in the center of Rogue’s gameplay, their new support Adrian “Trymbi” Trybus spent last season lighting up the ERL, and might just be the boost the team needs to rule the 2021 LEC Spring Split. Trymbi was promoted from AGO Rogue and won the EU Masters 2020 Summer Final MVP. Sounds like a super rookie to us!

Rogue took the 1st seed at the Summer Split last season, but with this better roster, they might just be able to claim the Spring championship trophy.

Ex-Misfits academy player, Jean “Jezu” Massol, is one of the most hyped bot laners around right now, and certainly impressed everyone with his Aphelios last June during the Mid-Season Streamathon, where he single-handedly won an entire team fight. Now that he’s coming to the LEC, fans are thrilled to witness how this prodigy will fare in the major leagues.

Aside from Jezu, we are also thrilled to see former TSM substitute Erik “Treatz” Wessén step into the spotlight. He is an underrated support with a decent champion pool. What’s more, Treatz subbed in for Vincent “Biofrost” Wang for half of the Summer Split and achieved better results than with the team’s main support player.

Kristian “TynX” Østergaard Hansen and Ersin “Blue” Gören are also promising rookies with a lot of potential coming into the 2021 season.

READ MORE: Celebrate Worlds 2020 in style with this collection of limited edition merch