Who is K’Sante, the newest League of Legends top lane champion? 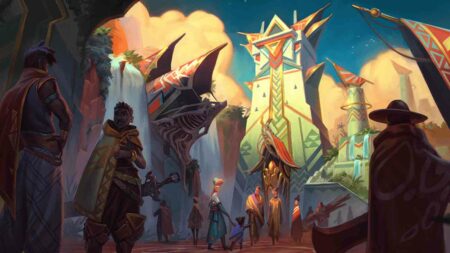 In the latest episode of LoL Pls, Riot Games’ League of Legends developer blog, Lead Producer of Gameplay Ryan “Reav3” Mireles revealed that the next champion will be a tank hailing from the desert region of Shurima.

K’Sante, the Pride of Nazumah, was first hinted at in the Champion Roadmap in April 2022, described by the game developers as a “high skill” top lane tank.

K’Sante, the Pride of Nazumah, is slated for a 2022 release

According to Reav3’s description, Nazumah is an oasis city located on the southern outskirts of the desert. Unlike the rest of the region, its inhabitants do not worship Azir as their god.

Based on lore, the oasis where Nazumah is built is one of the few water sources within the area, so historically, its people had no choice but to compete with monsters for resources just to survive.

After a hard-fought struggle, they claimed the oasis as theirs and built a society around it. K’Sante’s story begins 500 years after — the leader of warriors who hunt desert monsters.

His unique weapon is made from regenerative hide, which he obtained after fighting one of the toughest monsters in the desert. It is a blunt weapon that can be shattered to reveal crafted, sharp blades within. The hide then naturally regenerates back into its blunt form.

“He can bludgeon the crap out of you,” said Reav3, who also highlighted that the entire city state of Nazumah is constantly impressed by K’Sante’s skills, hence his title.

A total of four champions have been released this year so far, namely Zeri, Renata Glasc, Bel’Veth, and Nilah, who last came out in July 2022.