Azir has a positive win rate in only one region among LCS, LEC, LCK, LPL

It’s coarse and it gets everywhere. 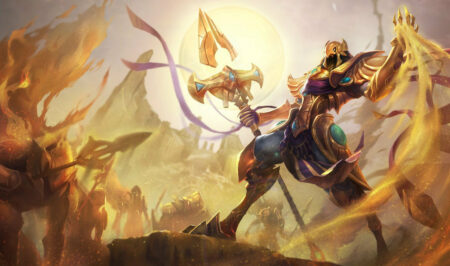 The Emperor sure has returned.

Scaling champions are dominating most roles on Summoner’s Rift in major regions, which sees Gangplank as the most picked champion at top, Senna, Zeri, and Ezreal at bot, and Corki and Azir in the mid lane.

Even though Azir has a 45% presence across the LCS, LEC, LCK, LPL according to LoL statistics site Games Of Legends, and is within the top 15 most picked champions, his overall win rate has been negative at 46%. In fact, across the four major regions, only one has actually found success on him.

Like it or not, we’re back to the same old Azir versus Corki mid lane meta.

Ahri’s revamp still makes her relevant, Lissandra has rose in priority as a counter pick, while Taliyah’s revamp has also put her in the limelight. But Corki’s high 59% presence and 49% overall win rate trumps all other mid lane champions within major regions. His late game damage and toolkit is unlike any other, with the ability to poke, kite, and even all-in with Special Delivery.

Even though Azir has been picked 16 times in the LCS so far, he has one of the lowest overall win rates at 37.5%. Picked 21 times in the LPL, the Emperor has also been drawing the short end of the stick, with a low 33.3% win rate.

In the LCK however, it’s a completely different story. He has twice the amount of success compared to the LCS and LPL, holding a whopping 60.9% win rate in 22 games played. Gen.G’s Jeong “Chovy” Ji-hoon played him the most in four games, and hasn’t lost once.

Azir was even flexed top by Liiv SANDBOX’s Kim “Dove” Jae-yeon, who scored a win against DRX’s Hwang “Kingen” Seong-hoon, finishing with a positive 3/1/8 KDA.

If we take a look at Azir’s overall statistics since he was released in Season 5, the LCK still comes out on top with a 51.8% win rate.

A champion with a very high ceiling, not many professional mid laners are able to maximize his potential. In 2015, even Lee “Faker” Sang-hyeok had to take a back seat on the bench in favor of substitute mid laner Lee “Easyhoon” Ji-hoon when Azir was dominant in the meta. When SK Telecom T1 won Worlds 2016, Easyhoon even received a skin on his signature champion.

While the Korean solo queue ranked ladder does indeed produce some of the most skilled players in the world, LCK teams’ general playstyle could also account for Azir’s positive win rate in the region.

They’re smart when it comes to setting up vision around objectives, playing around fog of war, with a focus on executing coordinated team plays. It’s an aspect that’s important for Azir players, for he risks his life every time he shuffles in with Emperor’s Divide for the big wombo combo.