Exclusive: VOD reviews are useful, but ShowMaker believes this makes you a better LoL player

MSI may be over but I’m still taking notes. 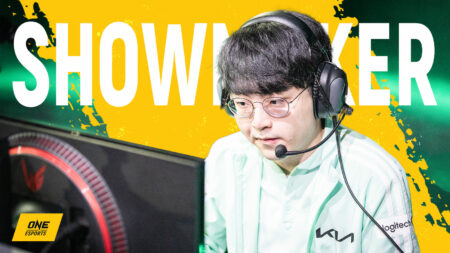 This is ONE Esports’ first article in an exclusive interview series with ShowMaker. Read about how he deals with losses and celebrates victory in our second article.

Despite some early struggles at the start of LCK Summer 2022, DWG KIA have picked up the pace in the second half, and are well on their way to qualifying for the playoffs.

Summer is a significant split, not just because Worlds qualification is on the line. Jang “Nuguri” Ha-gwon is back, reuniting with Heo “ShowMaker” Su and Kim “Canyon” Geon-bu, the trio that won the 2020 World Championship together with Jang “Ghost” Yong-jun and Cho “BeryL” Geon-hee.

Besides adjusting to the strengthened roster with Nuguri, who took a sabbatical during Spring, the team also had to recalibrate to patch 12.10’s Durability Update which changed the League of Legends meta.

In this exclusive interview with ONE Esports, we check in with DK’s mid lane staple ShowMaker on how he’s been dealing with the myriad of changes and the learning method he discovered that works best for him.

When a new patch drops every two weeks in League of Legends, ShowMaker would first read through the patch notes, then play through the updated champions in solo queue, he told ONE Esports.

He’ll then try to figure out the game developer’s intentions behind the changes.

Patch 12.10 was a big one that increased the base armor and health of all champions across the board, shifting the meta away from early game snowballs to favoring late game, scaling carries. Mid lane champions like LeBlanc, Twisted Fate, Zoe, and Vex once popular during MSI 2022 have since fallen out of the meta.

“I’m glad to see big patches that fundamentally change the game, because I think that they are responsible for League of Legends’ longevity,” ShowMaker commented.

Pro players not only have to adapt to every patch in a short period time, but also apply themselves individually and as a team at the highest level of competition, a constant learning curve on many fronts.

ShowMaker has been in the business since 2018, competing with DAMWON Gaming for five years now, and has discovered the kind of learning style that suits him best.

“I think the most efficient method is to discuss things a lot with your teammates,” he said. “Communication with other lanes is really important when you’re trying to properly map out how this or that matchup might play out. So while I think other methods like spectating are also useful, I think the best way to train is through sufficient discussion.”

Besides having extensive discussions with his teammates, he also consults DK’s coaching staff–whom he describes as “very capable”–on many other aspects of the game such as draft strategy and “in-game situations”.