DWG will be the LCK’s top seed at Worlds. 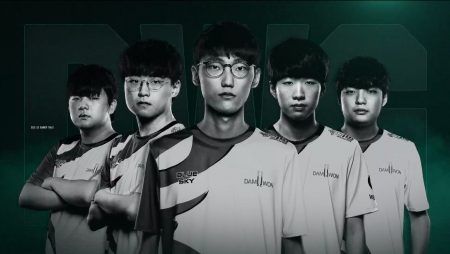 The 2020 LCK Summer Playoff Final saw the top two teams of the regular season, DAMWON Gaming and DRX, face off in a best of five series.

While DRX has been a formidable force in 2020, DWG matched their bot and mid synergies with better chemistry throughout the whole map, securing a 3-0 sweep.

The opening game was a test of patience between both sides. While the teams were more than capable of going for scrappy kills and insane outplays, they both opted to work for the gold lead.

Despite having a 1k gold lead, DRX tested out the waters in a contested drake. With Kim “Deft’ Hyuk-kyu’s Jhin going into Curtain Call, Jang “Nuguri” Ha-gwon’s Ornn called upon the Forge God to interrupt the ultimate and knock up some DRX members. Along with the timely engage, Kim “Canyon” Geon-bu’s Volibear immediately took Choi “Doran” Hyeon-joon’s Renekton out of the fight while the rest take two more kills and a drake for the DWG side.

With the Ocean Soul secured, DAMWON had no problem in sustaining team fights and opted to go headstrong through the top lane’s tower and inhibitor. Though Doran’s Renekton tried to contest their Nexus rush with a Slice and Dice, Jang “Ghost” Yong-jun easily kited the player to his demise while the rest of DWG picked off the remaining defenders and destroyed their first Nexus of the series.

DAMWON Gaming excelled in the laning phase of game two. While the kill-count stayed close between both teams, DWG were able to shred through the first line of towers with ease, giving them a slight gold lead.

While DRX were doing their best to stop DWG’s chances going into soul-point, Cho “BeryL” Geon-hee’s Alistar was an all-star finisher after he hex-flashed over the jungle wall, easily headbutting Ryu “Keria” Min-seok’s Sett into the wall for an instant delete.

To follow up, Ghost’s Kalista launched BeryL’s Alistar straight into Hong “Pyosik” Chang-hyeon’s Lillia for an ending smash while the rest of DWG chased Jeong “Chovy” Ji-hoon’s Jayce for a near-ace.

With a great engage near the dragon pit, DAMWON went for another epic monster in Baron. DRX did their best to stall the rush with Keria’s Sett flashing in for the interruption, giving enough time for Pyosik’s Lillia to steal the Baron.

Although DWG lost the Baron buff, they had the perfect chance to hunt down the low-life DRX members. Nuguri’s Renekton came out with a defiant double-kill while Canyon’s Nidalee pounced on the lone survivor in Chovy’s Jayce for the ace.

With Ocean Soul and a significant 10k gold lead, DAMWON easily smashed through the mid and bottom inhibitors to help establish some ground in DRX’s base.

Keria’s Sett then caught BeryL’s Alistar in a Facebreaker, but BeryL immediately turned to headbutt him into the rest of DWG for the first kill. With the 4v5 advantage, the rest of DWG easily tanked the damage with the Ocean Soul and finished off their second win of the series.

DAMWON did their best to close out the match with a killer mentality in game three. After a few scrappy skirmishes, ShowMaker and the crew were ready to attack DRX at the dragon pit. With Pyosik’s Lillia focusing on the Infernal Drake, ShowMaker’s Akali went straight for the jungler to steal the dragon and eliminate Pyosik from the fight.

With the rest of DAMWON following up with some crowd control, ShowMaker’s Akali slashed his way through a triple-kill with only Chovy’s Irelia left alive. Despite Chovy surviving the fight, Nuguri’s Renekton and ShowMaker double-teamed the Irelia player in the mid-lane, handing Chovy his first death in the game.

DRX tried to turn things around with a Baron rush, but DWG caught wind of this and immediately sent BeryL’s Pantheon ulting into the fray. While he fell to the cluster of DRX members, he managed to do enough damage to give Canyon’s Nidalee a killing shot on Keria’s Thresh.

DRX fared well against the invasion, but Nuguri’s Renekton saw super minions already attacking the Nexus turrets and opted to teleport for the backdoor. Luckily, Ghost and Canyon were able to hold off the remaining DRX members in the jungle, even getting a kill on Doran.

With Nuguri’s Renekton singlehandedly taking down the Nexus turrets, Ghost and Canyon quickly followed up as a second-wind to the fight, killing the other respawned defenders and claiming their third and final Nexus for the championship sweep.

With the triumphant victory, DAMWON Gaming goes down in history as the first-ever team from Challengers Korea (CK) to win an LCK title.

LCK’s third seed will be determined through the LCK 2020 Regional Finals, in which four teams with the highest championship points (Afreeca Freecs, Gen.G, KT Rolster, and T1) will fight for the last spot.

The first match of Regional Finals will be Afreeca Freecs vs. KT Rolster at 4 p.m. on September 7.