Snoop Dogg is now an official member of FaZe Clan

FaZe Snoop in the building! The hip-hop legend broke the news with a tweet that featured a video of him getting acquainted with fans and members of the org.

This isn’t the first time that FaZe Clan has signed a high-profile name in music. Aside from Tha Doggfather, rappers Lil Yachty and Offset are part of the org as content creators. 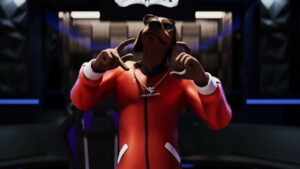 The clip showcased an animation of Snoop gaming in his luxurious recording studio, as well as a montage of his streaming lifestyle. From figuring out technical difficulties to scoring touchdowns in Madden — his favorite game — the hip-hop star proves that he has what it takes to become a gaming icon.

Despite being rap royalty, Snoop fits right in as a FaZe member. As part of the org’s tradition, the streamer personality got his own bedazzled FaZe Clan chain and changed his Twitter profile name to “FaZe Snoop”.

As of now, Snoop’s Twitch channel, aptly named “Doggydogg20”, currently has around 649,000 followers.

You can check out Snoop’s FaZe video down below: