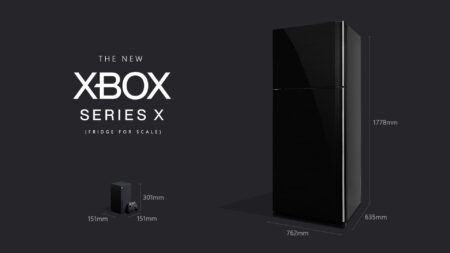 There are perks to being Tha Doggfather. One of them, apparently, is getting a replica of a next-generation console that is also an actual refrigerator for his 49th birthday.

Snoop Dogg flexed his custom-made, next-generation food and beverage cooler in a now-deleted Instagram post. But the internet never forgets…

As the clip shows, the multi-awarded rapper and “Xbox OG” received an actual Xbox Series X console inside the replica fridge, alongside an Xbox Series X-shaped cake and multiple bottles for his signature drink of choice, gin and juice. Why Snoop kept the console inside a plugged-in fridge is beyond us.

Since its design was revealed last December, the Xbox Series X has been subjected to memes comparing the video game console to a refrigerator because of its blocky design. Microsoft even poked fun at itself a few months later, tweeting this side-by-side comparison of the console and an actual fridge.

Apparently, Snoop Dogg wasn’t the only one who received an Xbox Series X refrigerator. YouTuber Justine “iJustine” Ezarik also got one, complete with an oversized replica retail box.

The fridge even makes the Xbox Series X startup sound when you open it up!

Microsoft had three of these massive refrigerators custom-made. While we already know who got the first two, the third one is going to be raffled off to a lucky fan, according to iJustine.

After all the memes, it turns out the joke’s on us, because Microsoft is now capitalizing on viral content to get some extra publicity for its upcoming console just weeks before its release.