The FGC legend speaks up about the rocking game. 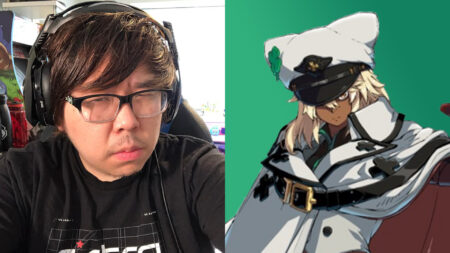 While his YouTube video was a direct reaction to Goichi “GO1” Kishida’s tier list, the American FGC legend had a lot of his own hot takes on the placements of specific characters.

The two pro players agreed on having Sol Badguy as the best S-tier character, but Justin went on a tangent by saying that Ramlethal was next in line on his Guilty Gear Strive tier list.

He further explained that Ramlethal is a hard matchup for him, and bears a lot of similarities to Menat from Street Fighter V.

“Ramlethal’s swords and her air-to-air game are amazing,” said Justin Wong. “Ramlethal is leading the pack in using different Roman Cancels in the game.”

Looking at the A-tier characters of his Guilty Gear Strive tier list, Wong believed that a handful of them could potentially become S-tier with the right kind of expert gameplay.

He highlighted Axl Low as a strong character that could be an excellent choice for stopping offense.

“I think Axl is a very good character,” said Wong. “He has so many anti-air moves and the damage will add up.”

The only downside of Axl Low is that opponents can resort to jumping and blocking to get around his zoning moves.

Potemkin was another top pick by Wong because of his aggressive offense. The pro cited Potemkin’s Megafist and Hammer Fall as hard moves to deal with, and even said that his command grab is “cheap and broken”.

Ky Kiske is the ‘Ryu of Guilty Gear Strive’

Though he’s lauded as the longtime rival of Sol Badguy, Justin Wong labeled Ky Kiske as the Ryu of Guilty Gear Strive.

Aside from having a basic fireball, Justin explains that the character is too honest, and lacks any real cheese moves that could catch opponents off guard.

“Ky really has to rely on punishing, whiff punishing, and reactions,” said Wong. “He’s a Street Fighter character in this game so he’s probably in the wrong game.”

With his normal gameplay, Justin Wong put the swordsman in B-tier on his Guilty Gear Strive tier list.

Justin Wong had a handful of critiques for Anji Mito and I-No as the worst characters on his Guilty Gear Strive tier list.

Anji Mito comes up as a weak character with no substantial game plan. While he does have a parry mechanic with Suigetsu no Hakobi, Wong mentioned that he can’t even punish parried light moves.

With his dragon punch Kou not hitting grounded opponents, much of Anji’s gameplay revolves around landing a random Fuujin for a solid combo.

Wong had a more broad critique on I-No, saying that her built-in hover dash makes her one of the slowest characters in the game.

When looking at I-No’s gameplay, she heavily relies on knockdowns and mix-ups that do no damage. Opponents will eventually predict the 50/50, and dismantle the whole mix-up with a block.

“They need to give I-No more stuff,” commented Justin Wong. “She has a lot of stuff, but I think they need to make it more user-friendly. It just doesn’t seem like I-No can really do too much.”

You can watch Justin Wong’s full explanation on his Guilty Gear Strive tier list down below: