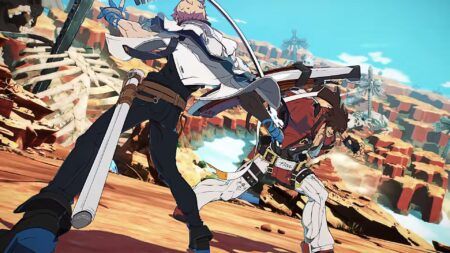 When you think of fighting games, a few titles instantly come to mind like Tekken, Street Fighter, and even Super Smash Bros., but what if I told you that an upcoming fighting game with a heavy metal ensemble might surpass all of them?

ArcSystemWorks’ Guilty Gear Strive is coming out on April 9 and this is why I think it could be a game-changer for the FGC scene.

The game has incredible netcode

ArcSystemWorks prides itself on a rollback netcode that the series has been using ever since Guilty Gear XX Accent Core Plus R. Just from the recent PS4 beta, FGC players have been raving about how good online matchmaking is even across regions.

For those who aren’t familiar, rollback netcode is a superior way of bringing fighting games to an online platform as it provides smoother gameplay and does not affect input timings. For more information, read this article.

FGC personalities Jiyuna and Steve “TastySteve” Scott got some hours into GGST and gave eager fans a look at what the netcode looks like. From their session together, Jiyuna already stated it’s the best fighting game netplay he’s ever played and you can easily see how smooth GGST’s cross-region gameplay can actually be.

Other than being a substantial factor in gameplay, Guilty Gear’s netcode is a means for them to cultivate a bigger and more inclusive player base right on launch.

“Rollback netcode allows for a great match experience, regardless of the distance between the players,” said the developers on the official site. “If you’re having trouble finding an opponent, try looking all around the world!”

With GGST being a lesser-known fighting game, its reliable netcode will easily lure FGC pros and amateurs from all regions to join in on the rocking fun and further appreciate its anime aesthetic and innovative game design.

The Guilty Gear franchise has been around since the 1990s but has been overshadowed by bigger FGC titles. Even its own spiritual successor BlazBlue has developed its own playerbase throughout the years.

In turn, Guilty Gear Strive looks to be the ArcSystemWorks’ best foot forward in terms of capturing the current FGC community once again. The game has iconic heavy metal visuals and complex gameplay that could rival the likes of any other big fighting game.

The developers have teased 15 playable characters that provide unique playstyles and designs. With just the two signature characters of Sol and Ky, Sol acts like the fiery bad guy foil to Ky’s more stunning swordsmanship.

GGST also provides FGC fanatics with novel game mechanics. Aside from move lists that range from sword hacks to riding hair, the game immediately teaches you must-use techniques like the Roman Cancel which acts like the classic meter-burn and the Psych Burst that works like a universal knockback.

Being a Tekken player myself who loves guitar music, Guilty Gear stands out as one of the grittier and more artistic 2.5D fighters that I could definitely get into. After trying my hand in the previous main title of Xrd: Revelator, I already picked I-No as my main character and was pleased to see her joining the Strive roster.

The developers will teach you how to play

One of the things that makes GGST an easy choice to play is its heavy emphasis on tutorials.

On its official website, there’s a How to Play tab ready for anyone who’s ever been curious about the series and the game in general. For a total newbie, the site teaches you the basic mechanics of attacking, cornering, and coming out with the KO.

As many of us gamers do, we like to pick characters based on their designs and GGST is more than willing to guide us through the process. With the characters page, GGST provides you with the full roster and even labels them according to their playstyles like Balanced, High Speed, or Unique.

Once you’ve clicked on a character, you’re also treated to a quick starter guide to get a feel on the character before deciding whether or not you want to main them.

GGST offers some other cool game modes from the usual tutorials, netplay, and arcade options. Players can test their skills on Mission mode where you’re tasked to apply the things you’ve learned in battle and Survival mode where you fight countless enemies with a limited healthbar. In terms of online play, players can look forward to the Tower System, a quirky online lobby that helps you find players who are literally on your level. As you progress, you automatically move up floors and constantly meet players of your skill level. The highest floor is reserved for the best of the best, similar to Tekken 7’s Tekken God Omega and Street Fighter’s Warlord.

With all these modes and options to help you refine your skills, Guilty Gear Strive becomes a beginner-friendly game that gives new players a chance to strive and be their best from the get-go.