The main man shines through for the Japanese pro. It’s only been two weeks since the release of Guilty Gear Strive, but avid fans and players are already looking for tier lists to see which character is best for competitive play.

GO1 designed a very extensive tier list of all the GGS characters. Right on top, Sol Badguy is the only S-tier character right now due to his current dominance in the game.

Sol Badguy has an excellent range of moves with his mid-range Gun Flame and anti-air Volcanic Viper.

As for other notable characters, Chipp, May, and Leo slot in as A-tier characters for GO1.

While May and Leo were solid choices ever since the beta, Chipp comes as an interesting top pick considering his meme-like status during the beta. From the looks of it, Japanese pros are seeing beyond his glass cannon nature and utilizing his damage as an elaborate way to close out matches.

Chipp Zanuff and May are other solid Guilty Gear favorites 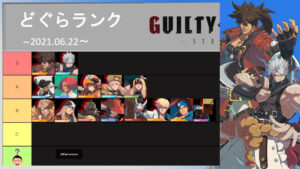 An interesting S-tier pick from Kyamei was the technique-heavy Zato=1. While the other pros placed him A and below, Kyamei might see potential with Zato’s alter ego of Eddie and how it provides longer airtime with Fly and a decent shield with Oppose.

Unlike GO1, the three other pros were fairly lenient on who was in A-tier and B-tier, putting a certain notion that these characters could possibly go up the rankings. KojiKOG even put Zato, Leo, and Axl Low in a question mark category.

Though these tier lists are a solid grasp on which characters have an edge, it’s always good to take them with a grain of salt.

While Chipp and Sol Badguy might be top tier right now, many pros are still figuring out how to properly use characters against each other. Once more GGS tournaments come around, we’ll get to see what kind of meta emerges from various regions.