Genshin’s tower defense game is harder than you think. 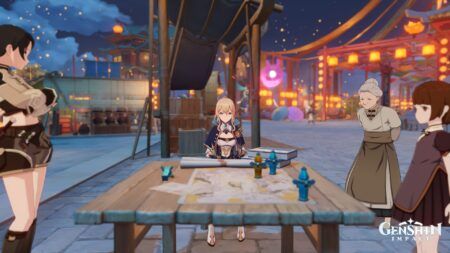 While the concept of tower defense might be familiar to some, Theater Mechanicus puts Teyvat’s strongest travelers and their elemental reactions to the test.

Once you’ve done the tutorial and the first few levels, Theater Mechanicus gets increasingly harder as you increase the point multiplier. You’ll be going against more hordes of slimes, hilichurls, and ruin guards so every turret and structure could mean life or death for your chances at a perfect run.

Here are some tips and tricks that will let you easily beat Genshin Impact’s Theater Mechanicus.

Vaporize and Melt are your best reactions

Theater Mechanicus puts your elemental skills to the test by stripping your characters of any damage capability. Only being able to use your party’s sole elemental skills for reaction set-ups, you will heavily rely on your towers to nail down on the incoming baddies.

Your best bet of eliminating your opponents is by using the elemental reactions you are already familiar with from the main game. If you want to knock enemies off their feet, you can use either Anemo or a mix of Pyro and Electro. If you’re looking to lock them in place, you can utilize Hydro and Cryo.

After a few trials on some of the hardest levels in TM, I found that the best turret set-up is Hydro, Cryo, and Pyro. If you’ve leveled up all your turrets, Hydro can catch fast opponents in a bubble, easily setting up a quick AoE freeze on them with the Cryo turrets.

Whilst the Hydro-Cryo synergy works in the frontline to stagnate the wave, you can position Pyro turrets in the backline to bombard them with the best damage amplification reactions in Genshin, Vaporize and Melt. Even if those pesky samachurls only get hit by one element, the Pyro turret will guarantee a killing strike.

Aside from the elemental reactions, Theater Mechanicus hands players a few novel structures in the form of recovery marks and mines. Marks are used to increase the cash you can get from a kill while the mines are instant damage dealers to any outliers.

With the higher levels requiring you to spend more on turrets, the best way to increase your cash flow is by stacking up on recovery marks.

As you can see in the picture above, I managed to stack three marks in a known choke point so I can get almost double the amount of coins in the first few rounds. Keep in mind that these marks will take up a turret slot so remember to dismantle them when you have enough money to put stronger structures in.

Unlike marks, mines will be useful throughout the entire stage. As the guardian angel to your perfect run, you can place your mines right in the middle of a choke point so you can easily cut an uncontrollable wave. You can also place it right next to a portal to save you from any speedy hilichurl berserkers who passed your turret line.

If you can’t afford a solid Pyro turret yet, mines are incredibly cheap and act as the perfect substitute during economy rounds. Don’t forget to position it exactly on the enemy’s pathway since it has a small trigger radius.

Defend with a friend 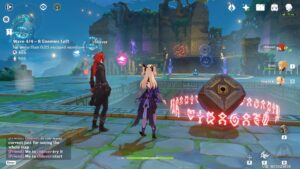 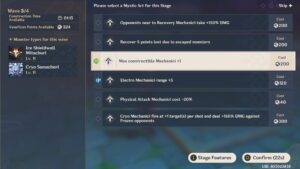 With Genshin Impact being a cooperative game on the side, Theater Mechanicus becomes surprisingly easier with a friend tagging along.

You no longer need to frantically switch from one character to another to cause any kind of elemental reactions. Instead, you and your friend can easily coordinate on who looks after what, especially when the higher-level maps introduce another portal where enemies can come out of.

One more interesting thing to note is that the co-op mode allows you to buy two Mystic Arts at the end of every wave. With double the people, you will also have double the advantages in later waves.

One downside of playing with a friend is that the turrets are locked to their initial builder, meaning that you can only reconstruct and dismantle your own turrets. To avoid any confusion, your partner’s turrets will be marked with a red ring at the base so if ever you need coins for that life-saving mine, you’ll know which turret to dismantle.

Theater Mechanicus will be available in Genshin Impact until February 28.