F1’s fourth-ranked driver is a huge fan of first-person shooters. 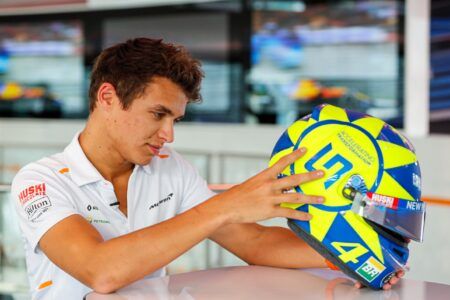 British Formula 1 driver Lando Norris claims that his passion for video games is a crucial ingredient in his burgeoning success as a professional racer.

“When I play games that require a lot of brain power, they keep me focused,” Norris — Formula 1’s fourth-ranked driver for 2020 — said in an interview with the Official Formula 1 magazine.

For the 20-year-old up-and-coming F1 star, gaming hones the skills and instincts required to react to a real-world circuit with speed and precision.

“[Video games] give me a similar feeling to when I’m driving a car. How can I do this better? How can I improve this corner? Where can I overtake the car in front?”

In addition to driving games and racing simulators, Norris is a fan of military-themed shooters like Call of Duty. He considers them “very different worlds, but they correlate in so many thought processes [like] the way you think about things [and] the strategies you need to think differently so you can outplay an opponent.”

Norris debuted on the esteemed F1 stage in 2019 as a member of the McLaren F1 racing team, after spending the previous couple of years under McLaren’s junior driver program. He ended his rookie season ranked 11th with a total of 49 points. Along the way, he made history by becoming the youngest British F1 driver to date.

In 2020, F1 and other major race tournaments have been forced to shut down as a result of the global coronavirus pandemic. As a result, many of them adapted by embracing the virtual racing space to keep the drivers, teams, and their legions of fans around the world engaged.

Despite the abrupt and unforeseen change in circumstances this year, Norris is finding himself in familiar territory. Last year, he teamed up with his F1 rival Max Verstappen in iRacing’s 24 Hours of Spa event. Then this year, he was among the first to compete in Formula 1’s new Virtual Grand Prix series. Since then, he has also participated in IndyCar’s iRacing events and the Virtual Le Mans 24 Hours Race.

In addition to being an avid gamer, Norris has his own Twitch channel. With live F1 events canceled indefinitely, he has been finding more time to share his passion for Formula 1 — both in real life and in virtual forms — as well as his other favorite games.

At a time when the worlds of sports and competitive gaming are converging more than ever, Norris is in pole position to blaze the trail for a new generation of racing and esports enthusiasts.