No WASD? No problem. FromSoftware’s Souls franchise is known for its incredibly tough boss fights. These battles pit you against lightning strikes, homing death spirits, and even a laser beam.

Despite facing such death blows, the most diehard Souls veterans still enjoy finding ways to increase the difficulty of the game. While some restrictions seem doable, such as a sword-only build, is it possible to beat the game without walking? Apparently, it is.

YouTuber ymfah shared his latest Dark Souls 3 run that pitted him against the game’s biggest bosses without ever using the WASD commands or left controller stick.

The Dark Souls 3 fanatic used clever workarounds to get his character to move. The first option was the simple normal attack, which moves the character towards the way it’s facing.

This method will have you running into walls and trees, so ymfah devised a better movement plan. Utilizing the Thief class, the player can properly turn by aiming in a direction with the Thief’s bow.

What’s more, the Thief class gives you a Bandit’s Knife with the Quickstep skill. This movement skill is more versatile than the normal attack since it provides invincibility frames, a must-have during boss battles.

The YouTuber ran into some problems when having to go down ladders. While some ladders can be jumped down, one specific ladder had a long drop that killed the character.

Ymfah eventually found a clever trick called a “fall control quitout”, which makes you quit the game mid-fall and reload your save with the character surviving the fall. 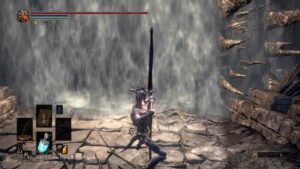 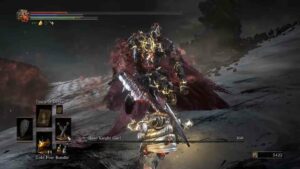 When it came down to the base game’s final boss, Soul of Cinder, ymfah used a similar quitout trick that activated the fight beyond the mist wall. Protected by the barrier, this gave him free rein to beat Soul of Cinder with just a bow and arrow.

As for Slave Knight Gael, the final opponent of the Ringed City DLC, the content creator had to face him fair and square.

The YouTuber’s approach was to “play it like a turn-based game”, landing a few hits after every dodge. Even though Gael had a few killer moves, the Dark Souls 3 player kept his composure and saw his deaths as a matter of health management and luck.

Ymfah finally seized the opportunity when a low-health Gael missed one of his slashes. He immediately quickstepped in to eliminate the final boss of the entire Souls franchise.

The best part of the whole no-walking run? It’s an actual guide.

If you want to try and beat Dark Souls 3 the same way they did, you can check out ymfah’s whole guide down below: